In the fifth in a series of posts from authors of 2018 books entered for The Story Prize, Vanessa Blakeslee, author of Perfect Conditions (Curbside Splendor Publishing), discusses 2018 short story collections she's looking forward to. 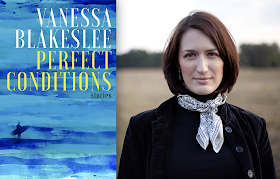 I have my eye on more than a few collections this year, and those that made my list include both debut authors and well-established voices. My literary tastes tend to reflect my nonfiction reading of late, which this year has included quantum gravity, the nature of time, and ecology; no surprise a few of these picks are influenced by the scientific realm. Others are shaped from place, a preoccupation with the fraught times we’re living in, or envision where we might find ourselves in a near future.

Unnatural Habitats by Angela Mitchell (WTAW Press, October)
I’ve been a fan of Angela Mitchell’s short fiction since I read her story, “Pyramid Schemes,” a few years ago in New South and have been looking forward to her debut collection for a long time. Mitchell is very much a contemporary Chekhov of the Ozarks, who writes the kind of gritty realism that I love—about ordinary people stumbling along as best they can, enduring the outcomes of their mistakes. And yet she’s not a regional writer; these stories, while rooted in setting, very much transcend their locale to illuminate the human condition.

The Amazing Mr. Morality by Jacob M. Appel (Vandalia Press, February)
Appel is one of our most lauded American short story writers, and this is his seventh collection. What compels me about Appel’s fiction is that he’s not afraid to step into the shoes of a wide array of characters, nor tackle a culture which is fond of both lying to itself and avoiding messy ethical questions. He’s a writer of imagination and courage, which we sorely need more of. Often disturbing, sometimes dystopian, Appel’s stories are provocative and surprising.

A Perfect Universe by Scott O’Connor (Gallery/Scout Press, February)
I’m drawn to story collections that center upon a particular place, and O’Connor’s is set around Los Angeles, his characters and their situations either in the midst of collapse or upon the precipice. While this collection isn’t described as dystopian in a futuristic sense, its themes and mood strike me as capturing the dystopia of the present day—that unnerving current running underneath our skins, warning us that the other shoe is going to drop at any moment. A bike thief, a movie star, a struggling mother and son—a rich variety of characters and social classes beckons in O’Connor’s world.

Ambiguity Machines and Other Stories by Vandana Singh (Small Beer Press, February)
Singh is a physicist, and her collection is peppered with philosopher-scientist characters in speculative situations. How we navigate the space-time continuum, totalitarian governments, and our own relationships, and how we might explore other ways of living, have earned Singh comparisons to Ursula K. Le Guin. I wonder how much Singh’s questioning of what it means to be human and the uncertainty of our journey within the quantum realm may have in common with Philip K. Dick, albeit in a style more poetic.

Come West and See by Maxim Loskutoff (Norton, May)
Another debut, this one revolves around place—an isolated corner of Idaho, Montana, and Oregon known in this near-future dystopia as the “Redoubt”— where desperate characters love and clash. In part an imaginative exploration of the real-life armed standoff at Oregon's Malheur National Wildlife Refuge in 2016, Come West and See emerged from Loskutoff’s haunting preoccupations with the rural-urban divide in the U.S. How does a rigidly libertarian survivalist movement play out in the American West? I’m eagerly looking forward to this linked collection, not only for its gripping and timely premise but also for Loskutoff’s elegant and gripping prose.

The Affliction by C. Dale Young (Four Way, March)
This debut novel-in-stories delves into the theme of invisibility and the paranormal, and how the bestowing of extraordinary powers may be at once a burden and bafflingly haphazard. How people disbelieve and shun what they can’t understand, and in other instances, come to worship and rely too heavily upon such “gifts,” characterize The Affliction.

Worm Fiddling Nocturne in the Key of a Broken Heart by Kimberly Lowjewski (Burrow Press, September)
Dark tales of misfits and fugitives inhabit the swamps of Lowjewski’s lush and mystical world. I’ve been anticipating this debut collection for awhile, and how Lowjewski, based in Florida, draws upon the beauty and harshness of this unique wilderness to weave her fiction. For those who are drawn to otherwise ordinary situations that are twisted with magical realism and folklore, this collection should prove a treat.

Florida by Lauren Groff (Riverhead, June)
I’d be remiss if I didn’t include Groff’s Florida—we live and write from within the same state, after all—and I’m looking forward to how she’s set about depicting the nuances and idiosyncrasies of our much-misunderstood peninsula. The tension between the ferociousness of nature—the hurricanes and thunderstorms, snakes and oppressive heat—and the built environment of Florida’s human inhabitants is a pervasive aspect of living here, and I expect Groff, a skilled writer, to capture that well.
The Story Prize at 4:09 PM
Share
‹
›
Home
View web version