Stuart Nadler on Seeing Stories in a Different Light

In the 27th in a series of posts on 2011 short story collections entered for The Story Prize, Stuart Nadler, author of The Book of Life (Reagan Arthur/Back Bay Books), discusses his writing process, and identifies his ideal story collections and the books that made him want to be a writer. 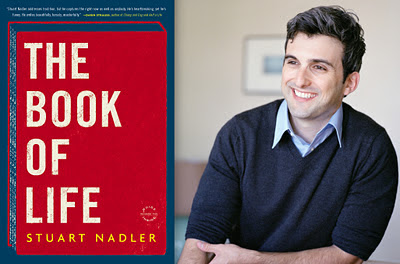 I write very early in the morning. I like to have my work done by noon so that I have the rest of the day to read. Of course, this is a wish. Increasingly, whatever plans I set up for my work are ruined. Life intrudes. Groceries need to be bought. Driveways need to be shoveled. I tend to write quickly. On the whole, I’m a macro-writer, to borrow Zadie Smith’s term: When my drafts are done, they’re mostly where I want them to be, aside from some small tinkering. I usually don’t begin working until I have a good idea of where I’m going. I don’t like to commit an outline to paper. For whatever reason, that always throws me off. But keeping an outline in my head seems to serve the same purpose without causing any real trouble. I revise while I work, going sentence to sentence, making sure every word is working, questioning every decision. Then I go paragraph to paragraph, doing the same thing. In short fiction, I spend a lot of time making sure the transitions between sections are doing what I want them to. In long fiction, I do the same thing with a chapter break.

Because I write so often in the morning, when the story gets close to being finished, I like to spend a few days working on it late in the afternoon. Reading at different times of day is like looking a painting in different light. Everything is different. Then, if I have the time, I like to put the work away for a month or so. Just until I can’t remember what it was I wrote. There’s a process of memorization that occurs when people write. You know the paragraph before you actually read it. That deep familiarity makes having any healthy, honest perspective impossible. Usually, when I pull the story out after a month, the soft spots and the weaknesses are glaringly obvious. After that I try to make my final touches. Then I let it go. Of course, that’s the hardest part.

Is there a story collection you consider your ideal of what a collection should be?
There are a few. Ethan Canin’s Emperor of the Air. Alice Munro’s Open Secrets. Anne Beattie’s Secrets and Surprises. James Alan McPherson’s Elbow Room. Lorrie Moore’s Birds of America. More than a great, well crafted short story, I love a terrific collection, one that shows the writer’s range, their quirks, their preoccupations. I love a story collection that obsesses over the same questions, like the young, struggling transplants in Jhumpa Lahiri’s Interpreters of Maladies, or the shoemakers and matchmakers in Bernard Malamud’s The Magic Barrel. And I love writers like Jim Shepard or Steven Millhauser whose every story is different from the next, whose every new project is whole new world.

Have you had a mentor and who was it?
I was lucky enough to have Ethan Canin as a mentor. I’d read his work a few years before I went to Iowa and had the great fortune to study with him. He’s a terrific writer, of course, but even more, he’s a great, generous teacher. All but two of the stories in The Book of Life, were ones that he read in their earliest versions. The best gift he gave me, though, was confidence. The writing life is filled with so much doubt—every decision, every paragraph—and to know that a writer I admired thought I was doing something right meant a great deal to me.

If you dabble in any other non-literary forms of expression, what do you do and how does it inform your work?
I play music. When I was young, I played in bands. But now, I just play alone—guitar, banjo—mostly with the doors closed, mostly on my couch, alone. Like a lot of people who take up the guitar in their early teens, I had the rock star dream, but I’ve let it go. Now it relaxes me. It’s the perfect antidote to a long, difficult day of writing. The guitar doesn’t know if you’ve slacked off on your novel, or if all you’ve done is rewrite the same few sentences over and over.

Which story in your collection required the most drafts or posed the most technical problems?
The fourth story in my collection, "Catherine and Henry," took me almost six years to finish. It was the last story I wrote before I went off to the Writers’ Workshop, and the very last story I worked on before we sent the book off to be printed. Part of the difficulty was that I was writing from two distinct points of view, and that I didn’t want those points of view to focus in on the same action. It took me a very long time to get the voice down for each character, and when I finally thought I’d gotten Catherine’s voice down, for instance, I’d realize that Henry’s voice seemed too stiff, or too relaxed. The ending also gave me fits. It’s a long story as it is, forty-something pages. But at the end, when the deadline kept getting near, I wrote very long versions of the story, drawing out every possible detail, refusing to make choices. In an odd way, letting the story go like that allowed me to go back and prune it down to where it is now.

What book or books made you want to become a writer?
When I was young, I loved adventure stories—Huckleberry Finn, Tom Sawyer, Treasure Island, 20,000 Leagues Under the Sea, Charlie and the Chocolate Factory. And I had a great child-size version of The Count of Monte Cristo that I loved. It had a picture on every other page. I’m sure it was heavily sanitized, but I loved it. When I got older, there were certain books: Gatsby, Lolita, Franny and Zooey. Goodbye, Columbus was a big one. I remember reading Purple America at the beach my senior year in college, loving the language, and thinking that I needed to try to write. Wonder Boys had the same effect on me. It was a such a fun book, a book about loving books! By that point, I think, I was already trying to go for it.