We're pleased to announce this year's judges for The Story Prize: writer and critic Ismail Muhammad, bookseller Margot Sage-EL, and writer Karen Shepard.
Each year we enlist three independent members of the literary community to select the winner of The Story Prize from among the three finalists that Founder Julie Lindsey and Director Larry Dark choose from among the typically more than 100 short story collections submitted for the prize. We alternate years between having a bookseller or a librarian as a judge. At least one of the judges is a writer and the other is often a critic or editor.
The final deadline for 2020 entries is November 16. We will announce the three finalists in early January 2021.
To view more than 50 guest Instagram posts by writers who have published short story collections in 2020, go to instagram.com/thestoryprize/.

Ismail Muhammad is a writer and critic based in Oakland, California. He works as the criticism editor of The Believer, and his writing has appeared in The Nation, The Atlantic, The New York Times Magazine, and other publications.
Margot Sage-EL is the owner of Watchung Booksellers, an independent bookseller serving the greater Montclair, New Jersey, community since 1996. She founded Great Owl Books in 1994, a Parents' Choice Award mail order catalog featuring multicultural children's books. She has served on the board of the New Atlantic Independent Booksellers Association and on the ABA's Bookseller Advisory Council.
Karen Shepard is a Chinese-American born and raised in New York City. She is the author of four novels, An Empire of Women, The Bad Boy’s Wife, Don’t I Know You? and The Celestials, and one story collection, Kiss Me Someone. She teaches at Williams College.
Posted by The Story Prize at 2:29 PM

In Response to the Pandemic, The Story Prize Is Waiving Entry Fees for 2020

Because of the coronavirus pandemic and its financial impact on writers and publishers, for 2020, The Story Prize is waiving its $75 entry fee. In addition, if conditions are such that it isn’t possible to send printed books, we will accept e-book only submissions. We do, however, reserve the right to not accept particular book entries.

Entry fees and revenue from ticket sales to The Story Prize event, which we split with our partner The New School Creative Writing Program, are our only sources of revenue to offset the costs of operating the award. They cover just a small but important portion of the funding for The Story Prize, all of which the Chisholm Foundation generously provides.

This sacrifice on our part pales in comparison to the efforts of first responders and essential workers—and to the illness and terrible losses many have suffered. We hope for better times ahead.

The mission of The Story Prize remains to encourage and promote the publication and reading of short story collections. Of course, we highly recommend the 16 short story collections we've honored as winners of The Story Prize and the 32 books we've named as finalists. We encourage you to support your local bookseller if you decide to purchase any of these books. Thanks to The New School Creative Writing Program, you can view on YouTube at no cost video of past events, including readings by and interviews with most of the writers we've been fortunate to honor.

Here's the video of The Story Prize event, featuring the three finalists—Edwidge Danticat (the winner), Kali Fajardo-Anstine, and Zadie Smith—reading from and discussing their work:

What The Story Prize Judges Had to Say About This Year's Winner, Everything Inside by Edwidge Danticat

Here what the judges had to say about Everything Inside by Edwidge Danticat:


“The stories contained in Everything Inside are powerfully written. They are rooted in place and in family. From beginning to end, I found myself spellbound by the care taken with character. Relationships between parent and child, between neighbors and coworkers, and between created families: These bonds were so incredibly, carefully rendered. Love beginning and ending. Life beginning and ending. The way that Edwidge Danticat writes about place—specifically Miami and Haiti—left me feeling as though I were seeing something for the first time. We are all lucky such an important voice is in the world, creating such tender work.”

“It is something to see a writer whose previous work is already canonical write a story collection with the fierce desperation and love usually seen in first books. But Danticat is not one of our regular writers, she is a harking angel. She comes to tell us that the world is new, again and again, and that stories will not lose their urgency, their necessity. These stories zoom from the globality of immigration and natural disaster, to see the human being beneath the news stories and the humanity within each tragedy. Death is a major theme of these stories, and hope does not always prevail, but there remains a belief in human dignity and the importance of acknowledging the humanity in others. This shows in Danticat's choice of words but most often in her choice of narrator—not a spurned wife, but the daughter who never knew her father; not an earthquake survivor, but his lover. Danticat is a cherished writer for lovers of fiction and this book will also be cherished by lovers of politics, sociology and well, lovers of human beings.”

Here's what the judges had to say about Grand Union by Zadie Smith:

Here what the judges had to say about Sabrina & Corina by Kali Fajardo-Anstine:

“This is a short story collection that will find its way into your dreams—often as nightmares. The women of these stories will awake you in the middle of the night—they will be a warning. Fajardo-Anstine crafts each story around major turning points in the lives of Native and Latinx women from and of Colorado. As a writer, she is able to build characters who withstand and succumb to incredible physical pain and emotional strife-—but we never feel that we must look away. She makes her characters human enough that we feel it our duty to look, to keep reading. Without being overly plot driven, the stories are page turners. Without being overly dramatic, the stories make the reader feel agony. Fajardo-Anstine achieves this by writing with restraint in her sentences but with brimming emotional and physical honesty. Women have bodies, emotions, histories—and most of all women have each other. After each story I found myself wanting to call, touch, be with my sister, friends, daughters, nieces, cousins, aunts, mothers. Another way to be with them is to say, read this book.”

Edwidge Danticat Is the First Ever Two-Time Winner of The Story Prize for Everything Inside! 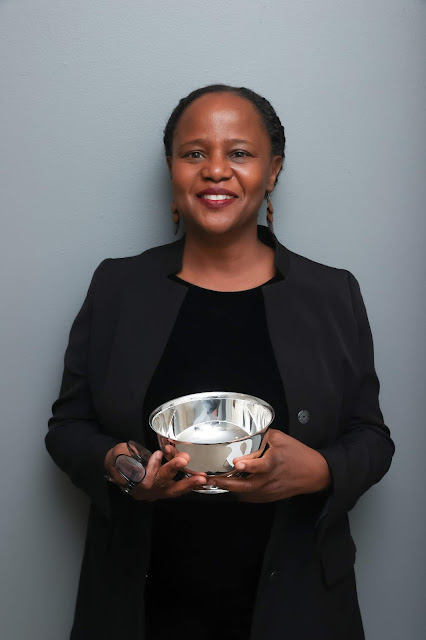 We're pleased to announce that Edwidge Danticat's Everything Inside (Alfred A. Knopf) is the winner of The Story Prize for books published in 2019. This makes her the 16th winner of The Story Prize and the first writer to win it twice. Danticat was the first winner of The Story Prize in 2005. The other finalists this year were authors Kali Fajardo-Anstine for Sabrina & Corina (One World) and Zadie Smith for Grand Union (Penguin Press). At the event at The New School, all three finalists read from and discussed their work on-stage. Danticat received $20,000 and an engraved silver bowl. As runners-up, Fajardo-Anstine and Smith each received $5,000. Congratulations to Edwidge Danticat and Alfred A. Knopf!

In the days and weeks to come, we'll post the judges' citations for the three books, photos from the event and after-party, and a link to the video.
Posted by The Story Prize at 9:30 PM