In the third in a series of posts on 2011 short story collections entered for The Story Prize, Helen Phillips, author of And Yet They Were Happy (Leapfrog Press), reveals how a cassette tape captured her imagination and, eventually, inspired her book. 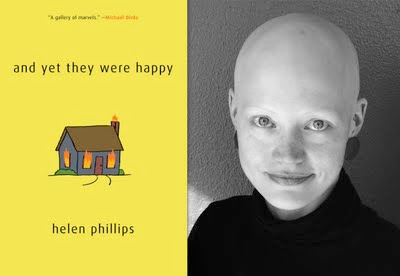 My Own Private Bob Dylan: Why I Spent Years of My Life Writing a Book So Bob Dylan Might Someday Read It

In the early nineties, when my parents installed a CD player, I absconded to my bedroom with the family tape deck, escaping the chaos of a home that contained four children between the ages of five and twelve, one of them (my older sister Katherine) severely handicapped due to the neurological disorder Rett Syndrome. I needed my own small empire amid the mayhem.

I brought with me a tape with the mystifying title Blood on the Tracks. Inside the beat-up plastic case, the profile of a shadowy, sad figure in sunglasses. I was a decade old and just beginning to sometimes feel a weird sort of shadowy sadness.

The tape was old and ratty when I rescued it from upstairs, and it got older and rattier with every listen. A buzzing, muddy sound ran beneath each song. Each time I listened might be the last before it snapped; who knew if I’d ever hear these urgent songs again?

It never occurred to me that this Bob Dylan was famous. I’d grabbed the tape from the family collection, just another of my parents’ random singer-songwriters, many of whom would never make the leap from cassette to CD.


*
Blood on the Tracks is a parade of women, and I assumed I’d someday identify with each—the vagabond divorcee, the millionaire’s widow, all the elusive girls.

But it was the flower-adorned goddess of “Shelter from the Storm” whom I knew he loved most. I harbored the fantasy that someday I would serve as shelter from the storm for Bob Dylan, that he would show up on my doorstep after searching fruitlessly for all his lost women in Honolulu, San Francisco, Ashtabula.

At ten, eleven, twelve years old I was already touched by that sense of inevitable loss. When I was ten, I started losing my hair. By the time I was eleven, I was bald and had been diagnosed with the autoimmune disorder alopecia universalis.

There’s a notable emphasis on hair in Blood on the Tracks, and on red hair in particular. All these magical women with their entrancing hair! And here I was, completely bald, a hopeless little monster. When I did get a wig, it was auburn.

Dylan’s proclamations about the unkindness of the world started to ring true: the boy in lunch-line asking if I was a skinhead, the stares and smirks. I entered adolescence feeling hunted by crocodiles, ravaged in the corn. But: I wasn’t the only one.


*
As a writer, I’ve stolen from Dylan, or tried to. The confidence with which he tosses us into his alternate universe, the conviction with which he delivers his haunted visions. The bizarre yet resonant leaps he makes from one world to another, from neon signs to diamond mines, from cold cityscape to fraught fairy tale. It’s a courageous (and generous) thing to do, to open that door into your private world in all its peculiar particularity.

And it’s as a writer that I’ve gotten as close as I can to my naïve-yet-enduring desire to offer Bob Dylan shelter from the storm. In And Yet They Were Happy, Bob Dylan is at my side. He’s dancing (grudgingly, but still) with me as the old family farm starts to flood. He accompanies me to the emergency room, and to the farmers’ market.


*
It would annoy me greatly to see an essay titled “My Own Private Bob Dylan.” I’d consider not even reading it. But I would, as you did. And perhaps, like you, I’d have made it this far.

Because there are so very many of us who know that he has, all this while, been singing just to us. His world is so idiosyncratic, yet I get it, we each think. It matches my idiosyncrasies.

I know I’m not alone in my twin feelings of joy and despair when I hear Blood on the Tracks playing in Starbucks or a clothing store—glad because I am always glad to hear it, sad because shouldn’t it just be me and the worn-out tape of some guy named Bob Dylan?

That said, imagine my relief when the tape finally snapped and my parents explained to me that it would not be hard to replace it, not hard at all.
Posted by The Story Prize at 5:32 AM