In the 66th in a series of posts on 2012 short story collections entered for The Story Prize, Dan Chaon, author of Stay Awake (Ballantine Books), describes how a famous writer inspired and encouraged him to write. 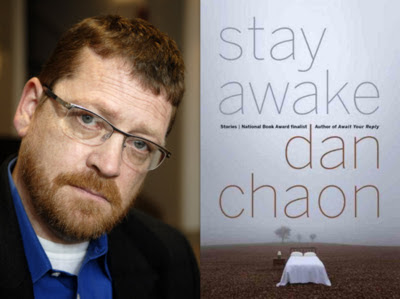 Perhaps that sounds melodramatic, but it’s not meant to be. I would not be the same person—I would not have become a writer—if it weren’t for Ray Bradbury.

I started reading Bradbury at an early age. I wish I could remember the first book of stories I read—I think it might have been The October Country—but in any case, by the time I was ten or eleven, I was well on my way to reading his entire oeuvre, and one of the results of this reading was that I was inspired to write myself. I wrote sequels to his stories, and imitations of his stories, because I couldn’t get enough of them.

I was growing up then in Nebraska, in a very rural western corner of the panhandle. The village I lived in had about 20 people in it, and I was the only child in my grade. I was bussed to school in a bigger town, ten miles away, but I was always glad to come home to my books. I didn’t fit in very well with the kids in town.

When I was in seventh grade, my English teacher, Mr. Christy, gave us a strange assignment. He asked us to write a letter to our favorite writer, living or dead. In the letter, we were supposed to explain why we liked their writing.

I decided that I would write to Ray Bradbury. But I went further than the assignment. I went to the library and found Ray Bradbury’s address in Contemporary Authors, and I sent him some of the stories that I’d written. I asked him if he thought I could become a writer.

A few weeks later, I got a letter back from him.  It was typed on the most beautiful stationery that I’d ever seen, and it was addressed to me.

“Dear Dan Chaon: You must never let anyone tell you what you want to be. If you want to be a writer, be a writer. It’s that simple. When I was your age, I wrote every day of my life, and my stuff wasn’t half as good as yours. Quality doesn’t count, to begin with, quantity does. The more you write, the better you’ll get. If you write a short story a week for the next three or four years, think of the improvement you’ll find in yourself. And, above all, what fun! Are you intensely library-oriented?  I hope so. If not, from now on, you must be in the library, when you’re not writing, reading, finding, knowing poetry, essays, history, you name it! Keep at it!”


Then, a week later, he sent me a critique of the story I had sent him, and I was so hooked, and so crazy in love. I grew up in a family where no one read, and books were not a big part of daily life, and I felt intensely as if I had been rescued. Ray sent me his book, Zen and the Art of Writing, and Brenda Ueland’s If You Want To Write, and I read them over and over.


During the next few years of junior high and high school, I would send stories that I thought were good to Ray Bradbury, and he would write me back about them. “The story is a small gem, and perhaps, as with your other stories, too small,”  he would say. Or:

“Take a look at your structure here. What does Mr. B. want from life? I guess you have left that out. My characters write my stories for me. They tell me what they want, then I tell them to go get it, and I follow as they run, working at my typing as they rush to their destiny. Montag, in F.451, wanted to stop burning books. Go stop it! I said. He ran to do just that. I followed, typing. Ahab, in MOBY DICK, wanted to chase and kill a whale. He rushed raving off to do so. Melville followed, writing the novel with a harpoon in the flesh of the damned Whale!”

“Your werewolf story is too short! It is an idea in search of conflict,  but you are close to finding a short story—some nice ideas there. Develop them! What about the other people in the ‘school?’ You drop hints, but I would like to know about the others. It is almost like the start of a longer story. What happens when he arrives at the school, or does he ever arrive? Play with the idea.”


By the time I went away to college, I had started writing other kinds of stories, and my correspondence with Ray began to peter out. I was distracted by undergraduate life, and I was thoughtless in a lot of ways. Ray wrote:

“Why are you going to college? If you aren’t careful, it will cut across your writing time, stop your writing stories. Is that what you want? Think. Do you want to be a writer for a lifetime? What will you take in college that will help you be a writer? You already have a full style. All you need now is practice at structure. Write back. Soon! Love to you! RBradbury”


I never did write back to him. I was scared by his questioning of college, and, by that time, I was enamored of a different Ray—Raymond Carver. And, ultimately, I didn’t know what to say. I loved college. I thought it did me good. I didn’t want to disappoint him.

And then, daily life took hold. I published a few stories in magazines, and I sent them to Ray, but he never wrote back. I spoke about him in interviews, his influence on me—and once I even saw him briefly at the Los Angeles Festival of Books, but the line to see him was hours long, and when I came to the front of it I wasn’t sure whether he recognized who I was. I gave him copies of my books, and he said “Thank you, thank you,” and then I was hustled along. He was a very old man, and he had been signing books for hours and hours. I don’t know whether he knew who I was, or not.

Now I am nearly the same age that Ray was when he first wrote to me—and that desperate twelve year old is very far in the distance. But I can see now how fully Bradbury has fitted himself into my brain. It is not just that he was a mentor to me at a time when I needed him most; it is also that his style, his mood, his way of thinking, has seeped into the very core of my work.

I think that most of us are really writing for other writers, writers we love, dead writers a lot of the time. When I wrote my first short story I was obsessed with Ray Bradbury and I remember wishing, I don’t know, wouldn’t it be cool if Ray Bradbury read this—!! But I might as well have been writing for Edgar Allan Poe or H.P. Lovecraft or Charles Dickens.

Even though no one would make a connection between my work and his, Bradbury is still the kind of person I think of most. I like the idea that I’m in some weird way having conversations with other writers that I really admire. To me, at least part of what you’re doing in art is connecting to this larger chain of stuff that you’re responding to. Whether it’s literature or whether it’s film or whatever.

Think of a story, that story, that mute story, coiled and dormant inside a book in a library’s forgotten  back room. Think of how you might accidentally open it.

It’s waiting for you.