In the 57th in a series of posts on 2013 books entered for The Story Prize, Kate Milliken, author of If I'd Known You Were Coming (University of Iowa Press), talks about organizing a collection and finding inspiration. 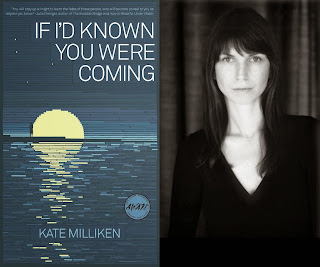 Usually it’s the body language between two people, an overheard bit of dialog, or a sudden shift in atmosphere of a room—something that presents itself with a hint of subtext. I’ll wonder about that moment, that image, those characters, for a while before I start writing. I write down three or four of these story scraps a month and lose a whole lot more to the belief that I’ll remember them.

What's your approach to organizing a collection?
A regard for the reader’s time is important, the need for changes in perspective and pace, an avoidance of echoing between stories, a balance of darkness and humor. And I want a kind of conversation to be happening between the stories. I most admire collections with a subtly identifiable lineage from the first story to the last—by character or location or theme. Here’s a metaphor: A book is a house. The ordering of the stories is your host, leading you from room to room, so that by the time you’ve reached the attic or the master bedroom, whatever the tour’s final resting place is—that final story—you feel a great intimacy with the whole of the place, but hopefully there’s a window there too, a view out to the world beyond the book. So that first story also has to act as an invitation in, a front door, a foyer with coat rack. I’ll put the metaphor away, but this is just to say that while every story matters, that first and last story have an added responsibility.

What's the worst idea for a story you've ever had?
It involves a wronged wife, the mistress hairdresser, a shampoo and a cut.

What's the best story idea you've had that you've never been able to write to your satisfaction?
It involves a wronged wife, the mistress hairdresser, a shampoo and a cut.

What's the best and worst writing advice you've ever gotten?
Write What You Know has become a kind of bad ad campaign for creative writing. It’s easy to say, it looks simple enough on the blackboard, it’s inviting to the student who is new to writing. But then that student realizes they don’t know much of anything. Write What You’re Curious About. Write Your Obsessions. Write About What Plagues You. These are the slogans that keep me going back to the page and they invite the understanding that writing isn’t only an act of self-expression, but one of discovery.

In what other forms of artistic expression do you find inspiration?
All of them. But daily from photography, music, and film. I’ve learned a great deal about dramatic structure from film and I often visualize scenes as if through a camera lens. Possibly a side effect of Hitchcock and Woody Allen getting more play time in my childhood then Tom and Jerry. And my husband is a photographer and filmmaker, so his work keeps me attuned to visual story telling. I keep images up that I relate to characters or settings and I usually listen to music while I write. Cat Power or Bon Iver for a heartsick protagonist, Lykki Li or Coco Rosie for the object of her desire, Amjad Ali Khan when I’m stuck.


What obstacles have you encountered as a writer, and what have you done to overcome them?
My own immaturity-insecurity-lack of discipline. They feed one another. My twenties. I wasted a lot of writing time and time in general before having kids. Now the “obstacle” of having less time is what has made me more productive, more willing to run with an idea, to avoid excuses in favor of action. My inner critic I skirt by getting up earlier than she can. Four or five a.m. seems to keep her groggy and ineffectual enough.

What's the shortest time it has taken you to write a story?
Two days. It was freakish. I wish I could bottle that feeling. Naturally line edits have happened in the years since, but paragraph for paragraph it’s the same. It must have been gestating, as I had a fifteen-minute phone conversation with someone and as soon as I hung up I realized the conversation had a dramatic arc and as I started fictionalizing, embellishing, the backstory, the last line, everything came to me in an uncanny rush. I’ve waited for that to happen again ever since. Never has, never will.

What's the longest time it has taken you to write a story?
Well, years. But that’s not active writing time. Most stories take me four months to a year to bring to some polished state, but they all lay dormant for periods of time. However long it takes me to get objective, to let go of my initial intentions. I have one story that I started ten years ago, a story that has an ending, but not the proper ending. Line for line it’s a pretty rough read to me now. Someday I’ll write it all over again. So ten years and counting.
Posted by The Story Prize at 8:49 AM