In the 53rd in a series of posts on 2016 books entered for The Story Prize, Peter Ho Davies, author of The Fortunes (Houghton Mifflin Harcourt), compares novelists and story writers to different types of soccer players. 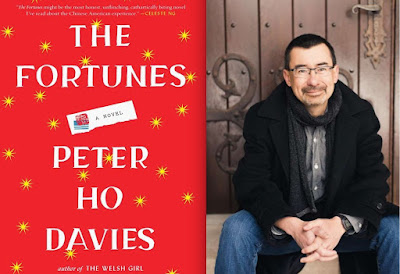 I’ve been playing soccer with my MFA students for a dozen years off and on—more off than on this fall since I broke an ankle in a game earlier this semester, and maybe more off than on going forward since I’ve just turned fifty (and they collectively are forever 25). Injuries not withstanding—and we’ve had our share of sprains, and concussions over the years—it’s a very friendly game: co-ed, mixed genre, students and faculty. My colleagues Michael Byers, Derek Palacio and V.V. Ganeshananthan have all been regulars; David Mitchell has a special place of honor as our only visiting writer to have ever played (for the record he has what the commentators would deem a “good touch for a big man”). The injuries, mine included, mostly stem from the collision of enthusiasm and clumsiness, but the game is mostly good for our mental health—a space where the natural competitiveness of writers can find a healthy and low stakes outlet. Basically we get to compete together at something unimportant and that we’re mostly not much good at (we have had a few skilled players over the years, among them Uwem Akpan, and Chigozie Obiama, an Oprah pick and a Booker finalist respectively, though the coincidence of soccer skills and literary success is probably just that).

Soccer has long been a useful, playful metaphor for me. I once compared getting into Best American Short Stories to some British non-writer friends as the equivalent of a soccer player getting picked for England. I’ve even thought of the table of contents of a story collection as a kind of “team sheet”—solid stories in defense (to block the critics), brief, speedy ones to race down the wings, a title story as mid-field general, an anthologized star striker. I also claim—mostly in jest—to be able to recognize writerly traits in the way my students play soccer (tenacious defenders do always seem likeliest to see their epic novels through).

Lately, I’ve been thinking about the nice distinction made in soccer circles between great goal scorers, and the scorers of great goals. The former are the prolific, poacher-types who tap in from six yards, scramble the ball over the line from a corner, amass great stats. The latter are the inspired artists of soccer, the scorers who chip the keeper from outside the box, connect with balletic volleys, beat two defenders with a sinuous shimmy. In a writing context, I suspect sometimes that our great goal scorers are our novelists; the scorers of great goals, on the other hand, are story writers or a least writers whose stories define them. Flannery O’Connor is a scorer of great goals, say. What a highlight reel! Aleksander Hemon, Peter Orner, and Daniel Alarcon—all actual soccer players, themselves - are surely also all scorers of great goals. Of course, there are exceptions. John Updike, say - undoubtedly a great goal scorer, but a scorer of great goals? Lydia Davis, a personal favorite, is an undeniable genius, but I’m not sure there’s a signature story or two I think of when she comes to mind.

This is merely a conceit, of course, but maybe just one more way of explaining the vexing difficulty story writers sometimes face moving to the long form…they’ve been transferred to a bigger club in a new league.
Posted by The Story Prize at 9:30 AM