In the sixth in a series of posts on 2017 books entered for The Story Prize, Scott Loring Sanders, author of Shooting Creek (Down & Out Books), discusses how he comes up with and develops story ideas. 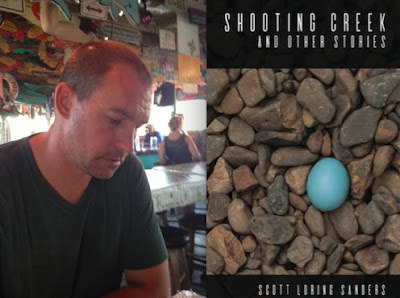 Usually, the first spark of a story for me begins with a random question that mysteriously pops into my head. Almost always that question begins with, "What if?" followed by some dark situation where I throw a character into a difficult scenario. I tend to work outward from there. What I’m most interested in when writing stories are the ethical and moral implications of a character’s actions and decisions. I also generally have my characters do the opposite of what I would do.

For example, if I was walking through the woods and happened upon a dead body, my first inclination would be to call the police. I’m assuming that would be the natural response from most people. Which is fine and good and respectable. But it’s not overly interesting. What is interesting, however, is the person whose first instinct is to not call the police. Why? What must have happened in their past to not report it? And then, “what if” the character goes a few steps farther? What if they proceed to hide the body? Or steal from the body? Or crazier yet, what if they take the body with them? See, now I want to go write that story! So that’s often how it begins for me. A character is faced with some sort of serious dilemma, and then they react in a way that is surprising and not expected. But there is always a plausible reason for their actions/reactions. And if I do my job correctly, the reader will fully buy-in with that reasoning. They might not agree with it, but at least they can understand it.

A lot of those scenarios appear in my head when I’m exercising, often while riding my bike or walking my dog or maybe hiking through the woods (minus the dead bodies—see above!). I do a lot of my best thinking that way, and that’s where I mentally work through plot and/or generate ideas for stories.  It’s not a conscious decision, by the way. Ideas randomly pop in from who knows where. That’s part of the magic of writing, something I’ve just accepted and no longer try to explain or understand. Ideas pop in, ideas pop out. If you think about it (whether you are a writer or not), how many ideas and thoughts go through your brain on any given day? Hundreds? Thousands? Over the years, I’ve trained myself to recognize particularly intriguing ideas, and if one really grabs my attention, I write it down. Or, these days, I speak it into my iPhone using my Notes app. I might not ever return to the idea, or I might come across it years later and start writing about it. I’ve definitely written stories (or novels, even) that began with one random note scratched down from years ago, and for whatever reason, it kept nagging at me, like an itch that just wouldn’t go away.

So who knows?  It’s all a mystery to me, but that’s what’s so fun about it, too. Pulling flotsam from the literary ether, then attempting to create a story that is both entertaining as well as thought provoking. Ultimately, my goal is to somehow turn it into art, into literature, into entertainment, in one form or another. And preferably, if all goes according to plan, into a combination of all three.
Posted by The Story Prize at 3:18 PM