Kevin Hardcastle Says: Nobody Will Really Believe You Can Pull This off

In the 37th in a series of posts on 2016 books entered for The Story Prize, Kevin Hardcastle, author of Debris (Biblioasis), discusses writing as an act of defiance. 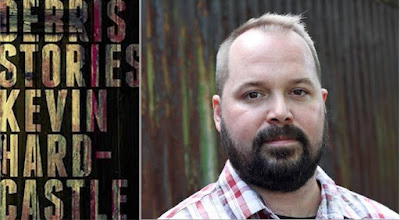 I wanted to write for a living since I was a kid, for as long as I knew what it was. I’ve been focused on it for so long that sometimes it’s worthwhile to step back from it and think on how it looks from the outside. Most writers know the range of the reactions they get when they tell someone that is what they’re trying to do for a living. Sometimes it’s a genuine interest, sometimes just the good ol’ blank stare. That kind of thing is old news to most of us, even to writing students and emerging writers. There’s a feeling that you are tapped into something that doesn’t have to be understood by everyone, whether in the motivation to write or in the actual nuts and bolts of the writing process.

There are many of us who have seen their writing reduced to a hobby or affectation in the eyes of people on the outside, and I think any good writer has found a way to plough through in spite of those who might tell you to give it up and get a real job (of course, most of us do have real jobs as well). The act of writing and all of the work that goes into it can be a valuable act of defiance, and there is something profound to that. What I’m interested in, and what I’d say to young writers, or myself as a kid, is that the doubts and disbelief will not stop with those folks who don’t write, or who think it’s not a realistic path. In fact, the further along you get the more you run into those folks, or some publishing machinery, that will try to tell you that you have certain limits, and that your aims as a writer might be impossible.

I’m still relatively new to publishing, as far as books go. My first collection of stories came out last year, and my novel will be out next year. As there were a lot of educational moments in trying to get published in journals over the years, and going through that process of rejection, perseverance, and, sometimes success, there are similar things that you learn as you navigate the publication of your books. Nobody wanted my books at first. Hell, I was essentially told that none of what I wrote was recognizable as Canadian Literature by people who are in charge of what gets published in this country. But, I felt that there was something valuable being said in my work that wasn’t being said in what we accepted as good writing in Canada, and I battled on. Eventually, I started getting support, reader by reader and story by story. I finally found the right editor (John Metcalf), and publisher (Biblioasis), and the first book did pretty well. I got my little indie tours and good reviews and the book was up for a few prizes, and won the Trillium Book Award.


At this stage, the people who place limits on you come from all over the place. Publishers start telling you what your writing is worth, and what you should write next. Agents have their own ideas about what they can sell, and how much more salable you could be. Even your peers, with books of their own, who’ve been through the wars, will tell you there is only so far you can go. That nobody will care about your book really, or that only so many will. You will not be able to do this for a living. You will not get further than being a writer who publishes some books in Canada and has a little bit of traction in that world. All of these people, anyone other than you, are to be defied and defeated much like a parent or teacher who told you to drop the imaginings and go to trade school.

Up in Canada, we have a robust community of writers and publishers, and a history of protectionism that both solidified this community, and insulated it from a certain level of competition or ambition. My aim as a writer is to make a living at this, and to get my books into places where they have a history of reading those kind of books, and to potentially break into other markets where the writing might find readers we didn’t know were there. I’m trying to get into Cormac McCarthy, Daniel Woodrell, Donald Ray Pollock territory, and find the readers that go for those books in the U.S., and worldwide. If the Canadian market is, in itself, something that tells you that your writing will only do so much, the way that you are looked at for reaching beyond that is like you’ve told somebody you’re going to land on Mars. Nonetheless, that is where I’m trying to go.

I’ve been lucky to have found some peers who are very good writers, however different they are from each other in their work. And, the reason they are good, to some extent, is because they couldn’t give a damn what other writers are telling them their limits are, and because they are not letting it impact the aims of their work. Better yet, we are all very competitive with each other, and want to absolute destroy each other on the page, to have our writing be the best, to stand out. That is a good thing, though writers are often too precious and sensitive to behave like that. We want to be the best on the page, but are friends in real life and support the successes we all have, especially when new ground has been broken. That lifts all boats, and it is the reason I have hope for an interesting future in my country’s literature.

So, I would tell any young writer, or anyone being told what they can’t do with their writing, to keep bashing your head into that wall until something gives. You might’ve had that moment in your early writing days when you guessed that nobody, nobody, thought that you could do this but you. And when you start to prove them wrong, that is a beautiful thing. Take that with you when the stakes get higher, and aim for whatever thing you are told you can’t do. The fear of this, in Canadian Literature, is something that has discouraged many good writers and turned others into some facsimile of themselves. You might well aim high and miss, but I bet you’ll land higher than you would’ve otherwise. It must be said that I know the reality of what might happen with my writing, as do the writers I like and respect for their ambitions. I have no designs on fame and riches. But I do think that, if you write honestly and tap into something that you know has purpose, that resonates with other people, you may just be that one who breaks through and gets to do this for a living. So, with my feet firmly on the dirt, I believe that those aims are worth having. And you should too. You should believe that in your blood and bones, especially when nobody else does.
Posted by The Story Prize at 9:30 AM