Anthony Wallace and the Everyday Eternities

In the 34th in a series of posts on 2013 books entered for The Story Prize, Anthony Wallace, author of The Old Priest (University of Pittsburgh Press), discusses the relationship between pattern and design in assembling a story collection. 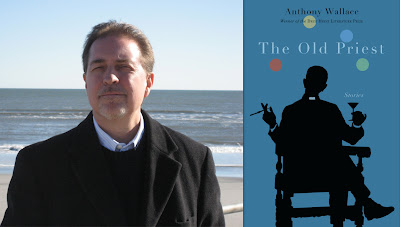 In The Old Priest I had the problem that the stories were written over a long period of time and that the title story was written well after the others, and so the stories represent my different changing and evolving selves as well as different stages in the development of my writing. My goal was to bring all this material together and revise it until I had an actual book, meaning something whole and complete that somebody could read from start to finish and feel that they’d gotten someplace not just with each story but with the movement from story to story that informs the collection and, I hope, the reading experience.

Often a title story focuses a collection: “The Magic Barrel,” for example, or “Cathedral.” “The Old Priest” is a long story I think of as a novella, and so I wanted to bring the other stories into conversation with it—or, more accurately, to develop further the conversation that was already present. When I first started writing I attended a day workshop at The College of New Jersey where Askold Melnyczuk, the founding editor of Agni, told the class that the parts of a short story “need to talk to one another.” I wanted to apply that idea to the stories in my collection, and to get as much crossfire going as possible. In “The Old Priest,” we move from a second person narrator to a first person narrator who quotes passages from the old priest’s Master’s Thesis in which he “talks about eternity as a place that contains everything that has ever been, every lost dog, as he describes it, every broken watch and burnt dinner, then adds, ‘If eternity really is eternity, then nothing is ever lost. It’s all there, for all time, safe and whole within the sight of God.’”

When I wrote that passage, I knew it was a lightning rod for the collection, and that within the collection there was a pattern of what you might call “everyday eternities”: characters mythologizing their own lives and the lives of people they care about, and a corresponding process of chronological time opening out to reveal something larger and less restrictive. I tried to develop other kinds of resonances that would connect with that primary motif. The patterns of imagery that connect one story to another, or many others, should work novelistically, because one way a novel is more complex than a short story is that it contains a more complex constellation of images. In my book, time and memory is the largest pattern, with characters remembering, telling stories—telling stories about other characters telling stories. I like the way the word “stories” hovers over the martini glass in the book jacket illustration. There is also some dislocation or disruption of time in every story—including ambiguity of time periods, or a layering within a given story of different time periods—so that time is worked out both horizontally and vertically.

As the collection advances I skirt plausibility a little more obviously in each of the last three stories, which also represents an opening out of the material in the general direction of eternity. For me, the ending of “The Burnie-Can” as a freestanding short story is not quite as powerful as the ending of that story when read as the ending of the collection, with all the accumulated weight of the elements I’ve described, including its resonance with the passage I’ve quoted from “The Old Priest.” I admit that this is so, but I don't consider it a weakness of the story because I’m out to write books more than I’m out to publish stories in journals and magazines. For me, it’s all about how the stories in a collection become more than the sum of their parts. If the reader can connect the final image in “The Burnie-Can” with other key images that form the emotional framework of the book, the collection should light up like a Christmas tree. That’s what I’m after.
Posted by The Story Prize at 7:00 AM