In the 35th in a series of posts on 2013 books entered for The Story Prize, Jess Walter, author of We Live in Water (Harper Perennial), reveals the genesis of a story. 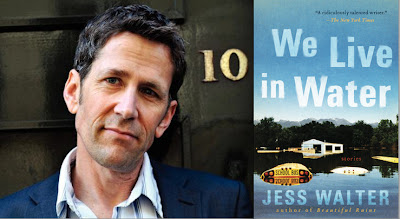 
The Story Writer dicks around all morning, answering emails and opening files, none of which inspire him. He’s filled with shame over this wasted morning. The Story Writer has solid work habits (he’s a 7-day-a-week, 5:30 a.m. kind of writer) but on days like today he feels like a jackass-hypocrite.

He feels especially jackass hypocritical later when he meets a Writer Friend for a beer and the Writer Friend asks, “What are you working on?”

This is what the Story Writer and his Writer Friend do: They drink coffee, beer and whiskey once every couple of weeks, and they ask each another, “What are you working on?”

This evening, the Writer Friend says, “What are you working on?” and because the Story Writer has dicked away the whole day answering emails and opening files, he has to make up a story about what he wishes he was writing: “It’s about a guy who moves to the exurbs and buys a gun for protection and then one morning, in the fog, he accidentally shoots a deer.”

“In the face?” the Writer Friend asks.

“Exactly!” the Story Writer says, thinking, Why didn’t I think of shooting the deer in the face? That sounds fantastic.

“That sounds fantastic!” the Writer Friend says, and the Story Writer thinks, Actually, that DOES sound fantastic, which is a problem because he hasn’t really written a word of the deer-shooting story. But now it seems like the greatest story ever—funny, disturbing, smack in the Story Writer’s wheelhouse. And just think of the potential for thematic depth! Guy-shooting-a-deer-in-the-face is a way to say something about the encroachment of humans on the wild, or the sick paranoia of some gun owners, or the illusion of security in a random world. Or something.

The Story Writer often hopes his stories will say something about … something. This is a dream he has, to be the sort of writer who has things to say about things. Sometimes, when he’s feeling his intellectual oats, he even imagines he’ll write a meditation. On, say, liberty. Or existential dread. But usually, the Story Writer gets too caught up in the story and the meditative part gets lost in comic action. Or he just dicks around and loses the whole day.

But, the next morning, inspired by the talk with his Writer Friend, the Story Writer is at the desk at 5:30, making great progress. He creates a guy, makes him 37, with receding hair, calls him Geoff. The name Geoff makes the Story Writer happy. He puts Geoff in one of those housing developments right on the edge of the forest. This, he thinks, will be a way to say something about those developments built right on the edge of the forest. He gives Geoff a gun. Actually, Geoff has a whole case full of guns. Geoff’s mild cultural paranoia has morphed into obsession. He loves guns. But Geoff and his wife Celia have recently had a baby, and Celia does not want the gun case upstairs near the baby. Geoff protests (How the hell is a baby going to crawl up on the gun case, unlock it, pull down a gun, load it, take off the safety and shoot himself?) but Celia is adamant. So the guns are all locked in the gun case on the main floor of the house.

Geoff and Celia are asleep in their upstairs bedroom when Geoff hears someone banging around downstairs. On the main floor. Where the gun case is. Then he hears voices. Two male voices. And he remembers that he let the cat out in the middle of the night, through the kitchen slider. Shit! He left the slider open for the cat. And now his worst nightmare—intruders are in his house and his guns are all down there! Stupid cat! Stupid baby! Stupid Celia! Stupid life in the exurbs! He fumbles around and remembers his brother has given the baby a T-ball bat, a tiny baseball bat, less than half the size of a normal bat. (What kind of moron gives a t-ball bat for a baptismal gift? Celia asked.)

This all seems richly thematic to the Story Writer, Geoff standing at the top of the stairs holding a tiny bat, while an entire arsenal exists beyond his reach downstairs and two stoned kids root around in the kitchen for munchies. He is on the verge of saying something about something.

But he gets stuck. For eight days Geoff stands at the top of the stairs, and the stoned kids hunt for Doritos while the story writer tries to figure out what happens next, and who the intruders are, and what will happen with the guns. (Does Chekhov’s Gun Rule apply to a locked case of guns? Must each gun be fired to fulfill dramatic tension? Or will, say, three or four fired guns be enough?)

Geoff falls down the stairs, and then he doesn’t. He gets in an argument with Celia and then the argument goes away. She calls the police, then can’t get through. Sentences are tightened. Adjectives lost. The story takes on a staccato rhythm. Then, in a whoosh of clauses (and parentheticals), the thing is loosened up. The kids turn out to be harmless, then become a little less harmless. Celia tries to emerge as a character. She has baked a pie and left it out. The boys eat the pie. The Story Writer has gone off the rails. He can’t imagine anything with less narrative punch than two intruders eating a pie. But what would Chekhov say about baking a pie and then not eating it? The Uneaten Pie Rule. It’s a pecan pie. The frustrated Story Writer gets hungry and goes for lunch. He has a pastrami sandwich and a slice of pecan pie.

The Story Writer wakes again at 5:30 for the next two mornings, but he makes no progress. He dicks around answering emails and opening files. Then the phone rings. “Hey, what are you working on?” his Writer Friend asks.

The Story Writer says, “I’m stuck on this short story.”

“The one about the guy who shoots the deer in the face?”

Oh right! How could the Story Writer have forgotten? The deer! He can’t wait to get back to work on the deer-face-shooting story! “Yeah,” he says. “The guy’s name is Geoff!”

“Thanks,” says the Story Writer, and he thinks it is fantastic! “What are you working on?”

The Story Writer is so excited to get back to Geoff shooting the deer in the face that he doesn’t catch what his Writer Friend says he’s working on.

Doesn’t matter. “That sounds fantastic!” he says, and they thank each other, hang up and get back to work.
Posted by The Story Prize at 7:00 AM