In the 28th in a series of posts on 2014 books entered for The Story Prize, Halina Duraj, author of The Family Cannon (Augury Books), discusses how she unintentionally appropriated someone else's story. 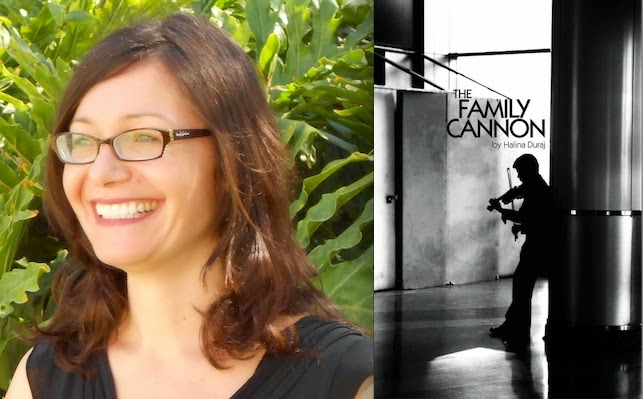 Do you ever borrow characters or situations from real life, and has anyone ever confronted you about it?
I wrote the title story of my collection, The Family Cannon, in graduate school at the University of Utah. My story was about two neighbors in a property dispute; I’d been working on it for months, but I knew it lacked the punch it needed in the middle. A few nights before it was due, I sat down to work on it and delighted myself by putting a cannon in it. I congratulated myself on inventing this detail, which fit my story so well, adding exactly the heightened drama it needed and emphasizing the theme of family story telling, the family “canon,” emerging across all of the stories I was working on at the time.

The workshop went well, but afterward, a friend and fellow student asked if he could talk to me for a minute. He told me he hadn’t been planning on using the cannon anecdote he’d told me recently in one of his own stories, but he would have appreciated it if I’d asked him if I could have it. You know, writer-to-writer courtesy, he’d said. I had no idea what he was talking about. And then I did. Suddenly, I remembered vividly that he’d had told me the story a couple of weeks earlier—we’d been out to drinks with a group of other students. Maybe somebody had asked me what I was working on, and I said something about neighbors, and my friend told the anecdote about two neighbors sharing a property line on some land in Colorado. One neighbor was so angry about something the other neighbor had done that he situated a cannon, a real, working cannon, in his yard and aimed it at the offending neighbor’s house. I remembered laughing, and thinking about the anecdote’s resonance with my own story. But by the time I’d sat down to work on the story a few days later, I’d completely forgotten my friend’s anecdote—I’d forgotten that my friend had told it, and I’d forgotten that it ever existed outside of my own brain.

I had wondered, as I wrote the cannon into my story, where it had come from. I’d been so pleased with myself when I invented it. Oh, the muse, I’d thought. She does come through sometimes.

When my friend confronted me, I was appalled at myself, and totally mortified. I apologized sincerely and repeatedly and with horror. My friend was gracious, and remains so to this day. I’d like to think it wasn’t me, forgetting what I’d heard so my writer-self could invent and create rather than remember and steal, but I can’t deny it: It was me.

When my shame burned off, I marveled a little at my mind’s chutzpah, how it interpolated that anecdote so effectively that I believed it to be my very own. It could have been my own story, and I must have recognized that immediately—as the words were coming out of my friend’s mouth, my subconscious was already rewriting them, already changing this and adjusting that, a tuck here, a pinch there, so that it fit my characters.

The experience taught me how much of writing is beyond my control, how a different operator is at the helm of my story-brain. If I hadn’t forgotten that that story belonged to my friend, I don’t think I would have felt brave enough to use it; I doubt I would have even considered asking permission. I don’t even like to ask someone to pass the mustard if it’s at the other end of the table. Whoever’s in charge of my story-brain bypassed my inhibitions in service of the story I was writing. I’m grateful, I guess, though embarrassed still, at my story-brain’s ruthlessness, and I wonder, from time to time, whether I’ll ever say something interesting enough to qualify for theft by someone else’s story-brain, amnesiac or not.
Posted by The Story Prize at 6:35 AM