In the 23rd in a series of posts on 2014 books entered for The Story Prize, Michael Blumenthal, author of The Greatest Jewish-American Lover in Hungarian History (Etruscan Press), discusses what he'd do if he weren't a writer and the risks of borrowing from real life. 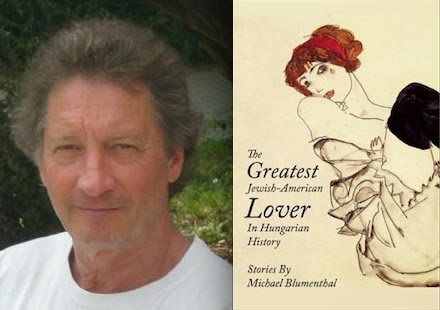 I would be, very happily, a primate zoologist. Even at this very moment, I would gladly trade every word I've ever written for a few years among the bonobos. My literary hero, on that front, is Frans de Waal.

Describe an unusual writing habit of yours.
I only write when I genuinely feel that I have something meaningful and interesting to say. From what I can tell, that is a truly unusual habit.

Do you ever borrow characters or situations from real life, and has anyone ever confronted you about it, been angry or pleased?
Yes, all the time, and I have also been frequently confronted about it. Years ago, when I published my "Harvard novel," a dear friend and former colleague, on whom I had modeled what I felt to be the most lovable character in the entire book, almost divorced me, and sent me, via Fed Ex, a nasty epistle informing me that he would not, under any circumstances, be coming to my book party. He has since long, and repeatedly, forgiven me, and expressed his admiration for the book. More recently, my wife—upon reading the galleys of my recent collection of short stories—insisted that I would forever lose a pair of friends on a situation of whose one of the stories (in which virtually everything—from setting, to occupations, to language, to ending—is radically altered) is modeled. I'm hoping, and assuming, they will never read it, but that still remains to be seen.

What's the worst idea for a story you've every had?
I once had the idea of writing a story based on a protagonist who was obsessed by rectal and other sexual odors. A bad idea, to say the least.

What's the best story idea you've had that you've never been able to write to your satisfaction?
I've never written a play—the only genre in which I haven't published. But some years ago I had an idea for a play based upon two characters who meet in a psychoanalyst's waiting room, and whose relationship leads the analyst himself to examine his past and certain still-undealt-with traumas in his romantic relationships. I, indeed, did spend months working on the play, only to discover, as I had long suspected, that I am not a playwright. Yet another of what Auden would have called a brilliant idea, badly executed. Always best to know the limitations of one's gift.

What one story that someone else has written do you wish you had written?
Philip Roth's "Defender of the Faith," Flannery O'Connor's "The Lame Shall Enter First," and James Salter's "Last Night." All three utterly brilliant in different ways: the first hilarious; the second and third utterly tragic.

Where do you do most of your work?
At a desk facing my study window, either in my house in West Virginia or my summer house in Hungary. When I was starting out as a poet taking dictation directly from the gods, I did most of my work at my "office" in Montrose Park in D.C.

What do you do when you're stuck or have "writer's block"?
I stop writing and do something else. Preferably, I take a long walk... in fact, many long walks. Or fantasize about being a primate zoologist.

What advice do you have for aspiring writers?
If you hope to write for posterity, avoid the Creative Writing Industry at all costs. If the scope of your ambition ends with a Creative Writing job, a bunch of younger lovers, fifteen minutes of fame, and a fine education in flattery, networking, false praise and sycophantry, such a program may be the place for you, and there are plenty to choose from. The best Creative Writing teachers in the world are right up there on your bookshelf, or in the library, and they don't charge a bloody thing. They won't, however, alas, be able to write you a letter of reference, or get you a job.

What else (beyond books and writing) informs or inspires your work?
The magnificence of nature. The beauty and mystery of existence. The complexities of trying to love and live decently and with kindness. The challenges of generosity. The disturbances of lust. The pains and travails besetting myself and my friends. The affections and cruelties of animals. And, of course, the idea of death... and the reality of it. And of pain.
Posted by The Story Prize at 8:19 PM