Richard Poirier, who died at the age of 83 on Aug. 15, is probably best known for being the founder of Library of America and of Rutgers' Raritan Review, but he was also series editor of Prize Stories: The O. Henry Awards from 1961-1965, a title I, too, held for six years, from 1997-2002. In between the two of us came William Abrahams' amazing 31 year reign as series editor.* I met Abrahams once but never Poirier.

In 1998, my then-assistant Scott Conklin and I compiled a complete list of stories included in every O. Henry Awards volume, starting with the first one in 1919, and I had the list posted on the Web, sorted by name and year. The alphabetical list also includes the name of the series editor who selected each story. So my own labors allowed me to get a quick sense of Poirier's short story legacy, via his work as O. Henry Awards series editor. I discovered that:
No doubt, Poirier missed the boat on numerous other great writers and stories. I know that in my time I did--that's par for the course. But even without all of his other accomplishments, Richard Poirier contributed to American short fiction through the writers and stories that he did introduce to thousands of readers in his six-year stint as editor of the O. Henry Awards. 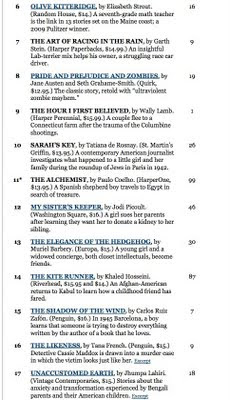 As I've said before, it's high time that publishers and agents stopped perpetuating the myth that there isn't an audience for short story collections. Two interviews I saw on the Web last week (via Twitter links) addressed this truism. First, this from an interview with Petina Gappah (An Elegy for Easterly) on the Short Review Web site:


I did not have a collection in mind at all, especially because very early on in my writing career, someone pretty high up in publishing had told me that there was no interest in story collections. So I wrote stories as a way of flexing my writing muscle, and to find my "voice," with no thought of collecting them in a single volume, until my agent . . . suggested putting them together in a single manuscript. I was stunned when Faber offered to publish them. This went against all that I had heard about publishers' loathing of short stories.

And James Lasdun addressed similar concerns in an interview he did for the Edinburgh Festival Guide, billed as "A Strident Defence of the Short Story":

Over the years James Lasdun has turned his pen to novels, screenplays, travel writing, journalism and poetry, but short stories are his current medium of choice, having recently published his third collection, It's Beginning to Hurt. Lasdun suggests that the short story should have great appeal ‘because it’s short, it’s quick and people have limited time and short attention spans. One would think it would fit right into the habits of mind that people have in this era.’ He offers a few hypotheses as to why it remains as the novel’s lesser-seen younger sibling. ‘I think there’s a feeling that this is an insider’s game, that it’s an artsy type of writing, and if you’re not part of that world then you might just be wasting your time and money and why not go out and get a novel by some novelist that you know and love?’

There was also a provocative post on the Rumpus last week, as well as one on the One Story blog.

The fact is, some short story collections have sold very well in the last year or two. Elizabeth Strout's Olive Kitteridge has been on the New York Times trade paperback list for 16 weeks. And, Jhumpa Lahiri's Unaccustomed Earth was number one on the hardcover fiction list last year and is having a substantial run (18 weeks so far) on the trade paperback list. Stephen King's Just After Sunset also hit the best-seller list last year. Wells Towers' Everything Ravaged, Everything Burned, made some extended best-seller lists a few months ago. The Best American Short Stories routinely sells more than 100,000 copies a year. And I'm sure Science Fiction and Horror collections and anthologies, which are often overlooked in these discussions, draw a very solid audience. They're certainly staples of these genres and worth reading.

I know, Strout won the Pulitzer Prize--but I'd bet her collection has sold better than many novels that have won the same award. Oh, and Jhumpa Lahiri is a perpetual best-seller--but the book that put her on the map was another short story collection, Interpreter of Maladies (also a Pulitzer winner). When all is said and done, her two short story collections have probably sold as well as her novel, The Namesake, which had the advantage of being made into a film. Of course, Stephen King is Stephen King--I have nothing to counter that, of course.

The point is, story collections aren't poison, and agents and publishers should stop treating them as such. Collections by established writers with strong followings will still sell. And debut collections probably perform no worse than debut novels. Story collections that get support from publishers and reviewers (as in Towers' case), have a chance to find an audience. In addition, I have no doubt that the digital age is going to be a boon to the short story, as shortness becomes a greater advantage.

I could go on and on and on (and no doubt will). But the bottom line is: Writers should keep writing stories. And agents and publishers should stop repeating empty truisms and get behind short story collections instead of offering resistance.
Posted by The Story Prize at 9:54 AM

My Favorite Forty-Two Books of the Year...So Far

There are 42 short story collections on my bedside table, so to speak. That's how many entries we've had for The Story Prize so far in 2009, and that may be only half the number we're going to get by the end of the year. If the second half were to match the first half, the number of entries this year would equal the most we've had: 84 in 2005.

There are two deadlines for The Story Prize--July 15 for books published in the first half of the year and Nov. 15 for books published in the second half--to allow ourselves time to read all of the entries. If we got all of them at the end of the year, it would be overwhelming, and we think every short story collection entered deserves careful consideration. So far, I've already read about 15 of the books (so my stack is actually a mere 27 books high), and several would make excellent finalists.

The total number of stories in these 42 collections, by the way, is 610. That may sound like a lot, but it's not nearly as many as I had to read each year when I was series editor of the O. Henry Awards. My estimate back then was about 3,000 short stories a year. (Which makes me wonder how Heidi Pitlor, series editor for Best American Short Stories, is going to read that many plus work published online, which is eligible this year for the first time.)

The 42 entries we've received so far come from 33 different publishers or imprints. Of course, not every book that could be is entered for The Story Prize, so this isn't a measure of the number of publishers who publish story collections or the number published in the U.S. each year. But my guess is that we end up reading about two thirds of them.
Posted by The Story Prize at 9:37 PM