Karen Shepard: How to Make Intermittent and Erratic Progress as a Writer, in Twenty-Eight Easy Steps

In the 39th in a series of posts on 2017 books entered for The Story Prize, Karen Shepard, author of Kiss Me Someone (Tin House Books), breaks down the brilliant moves that have brought her fame and fortune. 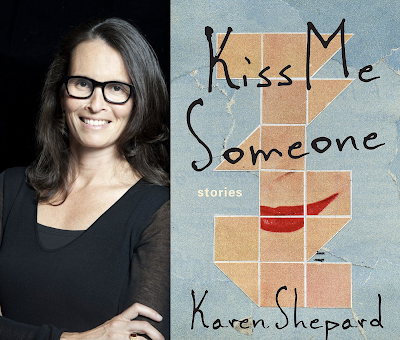 1. Write a first novel about Asian/American/European women, which is what you are, except with characters who experience things you’ve never experienced. Watch the publisher’s art department produce a cover it considers vaguely Asian, with lots of deep purples and soft focus. Read reviews that claim you don’t look Asian enough in your author photo. Wonder: Enough for what?

2. After the paperback edition features a new cover with a black and white photo of an Asian baby, have someone at a reading ask if the baby is you.

3. Ponder identity politics. Realize that when you were a student in college, you could’ve been a member of one Asian student group, whereas now at that same college you could be a member of four. Find yourself unsure as to how to feel about this. Recall a time a Chinese American colleague told you that your experience as an Asian American was different because you could pass as white. Remember that she added, “So you identify as Asian American. Fine.” Remember how she went on to say that you didn’t “read as Asian American” because you read as “too powerful,” and how she added to that the speculation that it was because of your association with your “very powerful” husband. Find yourself dismally sure as to how to feel about that: this colossal failure of imagination concerning what defines Asian American, or women, or power.

4. Write a second novel with no Asians, and instead bad boys and the women who love them. White boys and white women. Set it in the South. You are not from the South, though you lived there at various times in your life. Recall the Southern woman you heard complain: “You know, she’s from New York.”

5. Ponder your own identity as a Chinese Jew. What it means. Should such a writer write quietly lush prose about repressed men and long-suffering women who make delicious food? Flamboyantly lush prose about guilt and suffering? And which of those would be Chinese? Which Jewish? Stop and think: Maybe you should be a personal shopper. You would do that well. Is that a Chinese trait or a Jewish one: shopping? Which group has more style? Think: Don’t go there. You will offend everyone.

6. Grow tired of trying not to offend.

7. Write a third novel set on the Upper West Side of New York City in the '70s, a time and a place you remember as filled with possibility, if you can drain that term of some of its optimism and replace it with a healthy dose of anxiety. Remember that feeling that anything could happen. You might see anyone of any race doing anything with or to anyone of another race. Write your way into remembering more. Write your way into discovering what you never knew. Anything could happen: not a bad place to start when it comes to fiction.

8. When that novel is published, answer questions about that time and place, since you’re now, apparently, an expert, having lived there.

9. Remind yourself that as a fiction writer, your authority is, or should be, based in imagination, and not just experience. Lament how often the world acts as if the opposite is true.

10. Remind yourself that despite your ongoing claims to the contrary—to loved ones, to friends, to everyone—you do not know everything.

11. Attend a lecture by an art historian at your local Historical Society. Bring your toddler daughter so you can’t fully concentrate on what’s being said about this group of Chinese workers, brought into your small New England town in 1870 as factory strikebreakers. They ended up staying for ten years. Get excited enough to take quick and incomprehensible notes in the back of your checkbook register. Think: this is something you want to know. Don’t yet ask yourself why.

13. Announce to your husband that this is a great idea for a novel, but you are not the person to write it, not because you are not Chinese enough, but because you’re not writer enough.

14. Read more. Discover slivers of why emotionally you might’ve been interested in this story in the first place. Discover where your weird psychological and emotional make-up intersects with the weird psychological and emotional make-up of this historical situation. Again, not because you are a Chinese Jew, but because you are a human being inhabiting this earth.

15. Spend another several years writing. At the same time, try, with your usual inadequacies, to be a teacher, a mother, and a wife. Turns out it’s hard.

16. Write more. Rewrite. Show what you have to your first reader, your husband. Rewrite again. As Beckett would say, Fail again, fail better.

17. Have your agent try to sell the finished product, your fourth novel, in fall of 2008. The first three had sales figures that sounded more like shoe sizes. Did you mention that it was fall of 2008?

18. Have the editor of your third novel tell you there will be an offer and then have her publisher forbid that offer. His stated reasoning: It is too unlike your previous novel. His reasoning: Your sales figures sound more like shoe sizes.

19. Be rejected by many other publishers. This has less to do with being too Chinese or not Chinese enough or too Jewish or not Jewish enough, and more to do with being a writer. Being a writer will always be like this. But writers don’t write only to publish; they also write to understand the world and their place in it. That might translate to understanding what it means to be a Chinese Jew in this world. But it might not.

20. Think about writing another book, a book so wildly successful that all publishers will then want everything you have ever written.

23. Return to reading. Stay at it. Read books that are not warm baths but more like plunging into a cold, cold lake.

24. Return to writing. Write stories, in the hopes they will be easier. They are not. Which you already knew since you have been trying to write them for thirty years.

26. Return to pondering your life, as a Chinese Jew, a mother, a wife, and a teacher. A dog owner three times over. A control freak. Bossy. Someone who cries at advertisements. An occasional embarrassment to your children. Growing older. Filled with hope. Filled with despair. Supremely rational. The picture of lunacy. A writer.

28. Remind yourself that as a human being, your authority is, or should be, based in imagination, not experience: who we already are and who we can imagine ourselves to be. Ask yourself again: Who do you want to be? And how will you put it into words?
Posted by The Story Prize at 9:37 AM