In the 45th in a series of posts on 2017 books entered for The Story Prize, Emily Bieniek, author of On the Great Land (Ward Street Press), compares her own reaction in a stressful situation to how characters behave in fiction. 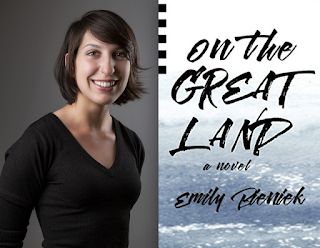 The night I was mugged started like any other night; better than usual, actually, because my boss let me go home early before the holiday break. I was riding my bike home from campus, as I always did, when I saw two people cross the street about a block in front of me. They looked too small, and therefore too young, to be fellow college students, which was odd because it was already 10:30 at night. What’re those kids doing out here? I thought.

I wish I could paint the moment that I knew the situation was not just weird, but dangerous. Both children stopped in the middle of the street, and each raised a long, thick rod over their shoulder. Silhouetted in the streetlight, they looked like batters at home plate.

It didn’t occur to me to turn around and bike away. As I drew closer, helplessly letting my wheels spin toward the pair, I realized that each kid was holding a golf club duct taped to a sturdier metal bar. I rolled slowly up to them and tried to sit up straighter on my seat.

“How can I help you?” I asked. I took my hands off my handlebars and held them up like the twin ends of a goal post. The children’s hoodies were drawn over their faces, but I could tell that they were both boys and that they were even younger than I had first thought - neither one was taller than my chest. If they hadn’t been carrying weapons, the situation might have been funny.

The bigger boy pushed the smaller boy in front of him. The littler boy staggered forward and froze, his reinforced golf club raised over his shoulder.

The older boy sighed. “Give me all your money!” he said, gesturing toward me with his own rod.

“Okay,” I said. “I’m going to reach into my backpack to get my wallet, okay?”

I reached into my backpack and held out my wallet.

“You know what?” the boy said. “Just give me the whole thing.”

“No problem.” I took my backpack off and gave it to the smaller boy. Both children relaxed. “You guys okay?” I asked. “Can I go now?”

I pedaled off. They hadn’t taken my bike or any of my jewelry, and I’d put my housekeys in my pocket before leaving work. My neighbor found my driver’s license on his lawn the next morning. I hadn’t been carrying my laptop. The kids’ net gain was an old backpack, eight dollars, and a flip phone.

Reflecting on that night, I’ve often wondered how I knew what to do and say to avoid getting beaten up. I had never been mugged before. Maybe the boys were never going to use those heavy golf clubs, but I think that the way that I instinctually sat up straighter and spoke calmly and politely impacted the outcome of the exchange.

People act on instinct in novel and complex social interactions all the time. In a story, it is the writer’s job to show the reader why their characters respond the way they do to new experiences, but in reality, people often don’t understand their own intuition. In a hero’s journey, the entire story can lead to on one pivotal moment for which the hero practices through a series of tests, but this is not how real life works; in reality, the pivotal moment is lost in the course of the hero’s life. In 2018, I hope to refine my ability to capture a character’s history, to convey that the character isn’t introspective enough to sufficiently to know why they are acting in a certain manner when faced with a new social challenge, and to demonstrate that although the story has climaxed, the character’s life will continue beyond the confines of the page.
Posted by The Story Prize at 9:05 AM