In the 46th in a series of posts on 2017 books entered for The Story Prize, Anthony Varallo, author of Everyone Was There (Elixir Press), describes a writing breakthrough, of sorts. 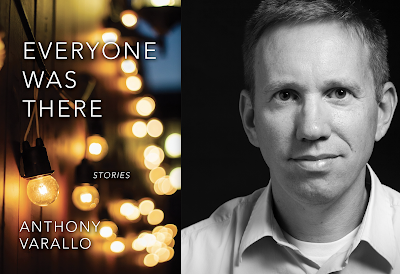 I wrote the first story I would ever publish in 1996. I was in my second year at my MFA program, where I was writing sensitive and melancholy short stories about children who felt, well, sensitive and melancholy about a variety of things. Their parents, for example. Their vanishing childhood, for another. Also, winter. Or, more specifically, snow. Snow in winter. The children were always walking around in the snow in winter, feeling sensitive and melancholy. Or they were sitting at the window (it was snowing outside) thinking about the way the past was always alive in the present, which was thoughtful of them, since that was usually the theme of the story. The snow picked up outside the window whenever they did that.

During this time, I remember going to workshop and not feeling well. I don’t remember what was wrong with me, exactly, probably a headache or the start of a cold, but I do remember that I was having a hard time paying attention to what everyone was talking about. My mind began to wander. And, for reasons that I still don’t understand, I began to imagine a short story where the main character fails to show up for his or her own story. Like a lead actor neglecting to show up for the play. The story goes on—but the main character never appears. A concept that struck me as incredibly clever at the time. I think I even jotted a few notes in my notebook, on the sly: Character doesn’t show up for story. Story continues anyway. Problems, etc.

I went home and wrote the story in a single weekend. The story, “Not Stuart,” didn’t turn out exactly as I had planned, though: the main character, Phoebe, doesn’t show up for her story (she’s only pretending to be asleep) while her rude and horrible but lovable husband Stuart walks through what would have been Phoebe’s story, complete with embarrassing meta-asides from the writer (me) about how badly the characters are behaving. A concept story within a concept story. Sort of. Even though I’d lost sight of the original concept so soon—how had that happened? The story ended with the meta-writer throwing his hands up in disgust. This story went all wrong! I can’t fault the ending for a lack of honesty.

When I look back at “Not Stuart,” I don’t regret publishing it, and I certainly don’t regret writing it. True, I don’t think it’s the best story I’ve ever written, but I don’t think it’s the worst, either. I remember writing it quickly, flush with the concept, certain of how clever it was all going to be. I remember putting words on the screen before I thought about them too much, or before I realized how heavy-handed the concept was. Before my doubts had a chance to get the best of me, too. I would give anything to write like that now.

Anyway, I’ve made my peace with “Not Stuart,” my first published story: I included it in my new collection, Everyone Was There, to keep the others company.
Posted by The Story Prize at 9:32 AM