In the 37th in a series of posts on 2017 books entered for The Story Prize, Bill Roorbach, author of The Girl of the Lake (Algonquin Books), describes his writing habits, his reading habits, and how he gets back on track. 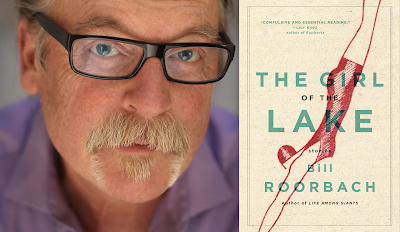 What influenced you to become a writer?

When I was five—an earliest memory—my mom took me to Shopper’s World, one of the first malls. It was still new then, late fifties, and we were going to see Santa. The wonderful thing was that it was just me and Mom, very rare, and about to get rarer: Eventually she’d have five kids. I sat on Santa’s lap and he asked me what I wanted and I said I wanted a desk. He seemed fine with that—very jolly in fact. On the way home Mom asked me why I wanted a desk. I said, “Because I want to be a writer.” She read to us, my mom, maybe that’s where my conception of a writer came from, the idea that it was something I wanted to do.

Describe your writing habits.
It used to be so clear. Get up, eat breakfast, write till lunch. Then a walk and a nap and write again, till dinner. After dinner, correspondence with editors, agents, and so forth. If teaching, writing in the mornings, class in the afternoon, grading in the evening. But then we had a kid. Now it’s ten minutes typing before the shower comes available, forty-five minutes on laptop in parking lot while the girl is at ballet, a couple hours after midnight (assuming no one’s throwing up), nineteen minutes while dinner’s in the oven.

Where do you do your best work?
I have a studio in a little outbuilding here at our place in Maine, but a family of skunks lives under it. Mostly they are good neighbors, but they do fight with the woodchucks who also want to move in, so there are stretches when it’s too smelly to work out there. These days I’m on the porch with the rest of the family, each doing our projects. Trouble is, the visual artists can chat and listen to music, so I’m often chased back out with the skunks.

Name something by another author that you wish you’d written.
Game of Thrones. But just for the money.

Where does a story begin for you?
Usually with something interrupting life as usual. A character is grocery shopping before a snowstorm. He sees a homeless woman struggling with her bags. He decides to help her.

How do you know when a story is finished?
I always seem to finish writing stories on Fridays. So much of my life was set up like that, from grade school forward: There’s a work week, and there’s a weekend. I don’t do it on purpose—some inner clock times everything out for me. To write a given story might take a few days, might take a year—doesn’t matter, I finish on a Friday. So that’s how I know I’m done. It’s Friday, and I can’t think of anything more to do: Stick a fork in it.

Describe a physical, mental, or spiritual practice that helps put you in a suitable state of mind to write.
Walking, usually in the woods or on the beach or otherwise in nature, though cities work well, too. Also gardening. So much so that I count both walking and gardening as writing.

How do you get yourself back on track when your writing isn’t going well?
Reading, walking, gardening, heavy drinking.

Describe an idea that you want to write or return to that you haven’t quite figured out yet.
I used to play keyboards in bands, though I’ve lost my chops over the intervening decades. I would like to learn or relearn one song really, really well and get say, the Rolling Stones to let me play it with them at one show, somewhere big, with jumbotrons and screaming fans. And then write about the experience.

Describe your reading habits.
I used to read relentlessly, always five or ten books going at once, a pile by the bed open to various depths, one main project always forefront, ready to be opened in all the interstices of a busy life. I’ve had periods of reading a book a day—until recently a book a week was just average. Now I’m lucky if I can read a book or two a month. The problem is getting older. The problem, frankly, is staying awake. Also not enough hours in the day. Success has brought a lot of duties. And a lot of those duties involve reading. When night falls, I’m more about watching a movie these days. Which I count as reading, if it’s a good enough movie.
Posted by The Story Prize at 9:30 AM