The Story Prize Long List for Collections Published in 2015 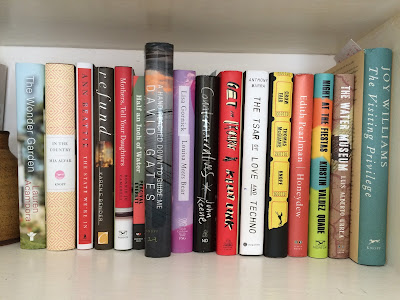 
It's very difficult to narrow this list down to a reasonable length. Every author who published a short story collection in 2015 deserves a great deal of credit, and at least a dozen other books we read could easily have been included.

We'll announce the winner of The Story Prize at an event co-sponsored with The New School's Creative Writing program at the Auditorium at 66 W. 12 Street on March 2. At the event, finalists Charles Baxter, Adam Johnson, and Colum McCann will read from and discuss their work. You can buy tickets in advance online or that night at the box office.
Posted by The Story Prize at 12:03 PM 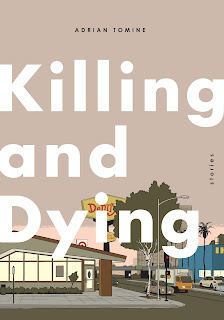 Three years ago, we created The Story Prize Spotlight award to honor an additional short story collection that we believe deserves further attention. Past winners have been Krys Lee's Drifitng House, Ben Stroud's Byzantium, and Kyle Minor's Praying Drunk. This year, for the first time, we're announcing this separate from our announcement of the finalists for The Story Prize to emphasize the Spotlight Award's separate identity.

We award this $1,000 prize to a short story collection that is of exceptional merit, as selected by the Director of the Story Prize from among all entrants. Winners of The Story Prize Spotlight Award might be promising works by first-time authors, collections in alternative formats, or works that demonstrate an unusual perspective on the writer's craft.

This year's winner of The Story Prize Spotlight Award is Killing and Dying by Adrian Tomine (Drawn & Quarterly)—a collection of six graphic short stories that have the depth and resonance of traditional literary fiction. Tomine employs a variety of voices, techniques, and narrative styles to convey the hopes and dreams, and the strivings and failings of his characters.

Beyond that, the use of artful visuals with cinematic framing and telling detail demonstrates a different approach to storytelling that nonetheless relies on carefully crafted language and maintains the emotional acuity and powerful impact that the best short stories put across.

For instance, the title story focuses on an awkward, stuttering teenage girl who aspires to be a stand-up comic despite her father's misgivings. Her mother, who  is more encouraging, becomes increasingly ill as the story progresses, revealing a subtext that isn't at first obvious. And when the mother dies (with little fanfare in the story) the father is left to reluctantly accommodate what he continues to believe is his daughter's misguided ambition.


Congratulations to Adrian Tomine and Drawn & Quarterly for winning The Story Prize Spotlight Award for short story collections published in 2015.
Posted by The Story Prize at 7:00 AM

In 2015, we once again invited each author of a collection we received as an entry for The Story Prize to contribute a guest post to this blog. Out of 100 authors, 48 chose to participate. Since 2010, the TSP blog has featured 384 guest posts from 372 writers (some have contributed in more than one year).

According to Blogger's statistics, most 2015 guest posts received 300 or more page views. The most popular post, "Colum McCann's Letter to a Young Writer," went viral (by our standards) and has so far drawn nearly 10,000 page views—the second most ever of any TSP blog post, after "Antonya Nelson's Ten Writing Rules,"  which currently has nearly 14,000 views. The author posts with the second and third most hits this year were "Bonnie Jo Campbell's Confessions of a Story Writer" and "Lisa Gornick Asks: Can Writing Make You a Better Person?"—both with more than 600 page views to date.

When we ask the authors if they'd like to contribute, we give them several options. One is to answer any or all of a series of questions, which we change somewhat each year. The 2015 questions were:
We also suggest some possible topics:
Contributors also had the option of coming up with their own ideas.

This index is in alphabetical order by last name, with author names linking to their books on IndieBound (unless a book wasn't lised on that site) and the rest of the guest post titles linking to the posts themselves.

M
Rebecca Makkai on What Some Readers Are Missing Out on
Where Margaret Malone's Stories Began Then and Begin Now
Colum McCann's Letter to a Young Writer
What Keeps Helen McClory Going
John McManus Rebuilds from the Ground up
Margaret McMullan Learns the Importance of Seeing
Andrew Malan Milward's 25 Entreaties
Emily Mitchell: Anatomy of a Bad Writing Day

N-R
Ben Nickol's Shrubbery Epiphany
Sameer Pandya on the Intimacy of “I”
Barbara Paul-Emile and the Insuppresible Urge
Leslie Pietrzyk Gets All the Answers
Kirstin Valdez Quade: All Work and No Play...
Sandip Roy's Act of Remembrance
Mary Rickert's Letter to a Young Writer

The Finalists for The Story Prize Are: Charles Baxter, Adam Johnson, and Colum McCann

We're pleased to honor as finalists for The Story Prize three outstanding books chosen from 100 entries representing 64 different publishers or imprints. They are:

There's Something I Want You to Do by Charles Baxter collects 10 stories, each with a one-word title representing a virtue or a vice. The title phrase resonates throughout, as several recurring characters find themselves speaking or hearing this request. The six stories in Adam Johnson's Fortune Smiles take place in territory as diverse as California, Louisiana, what was formerly East Germany, and North Korea, portraying difficult situations with sadness and humor. Colum McCann's collection, Thirteen Ways of Looking, consists of a powerful novella and three equally absorbing stories that explore how people process violence and loss.

The annual award event will take place at the New School’s Auditorium at 66 West 12 Street in New York City at 7:30 p.m. on Wed., March 2. Tickets cost $14. That night, Baxter, Johnson, and McCann will read from and discuss their work on-stage. At the end of the event, Julie Lindsey will announce the winner and present that author with $20,000 (which remains the biggest top prize of any annual U.S. book award for fiction) along with an engraved silver bowl. The two runners-up will each receive $5,000.

In the weeks ahead, we'll announce this year's winner of The Story Prize Spotlight Award, and we'll publish an index of guest posts form 2015 authors, and a long list of other exceptional collections we read last year.
Posted by The Story Prize at 10:02 AM