In the third in a series of posts on 2017 books entered for The Story Prize, Juan Martinez, author of Best Worst American (Small Beer Press), talks about how he rewards himself for getting writing done by allowing himself to draw. 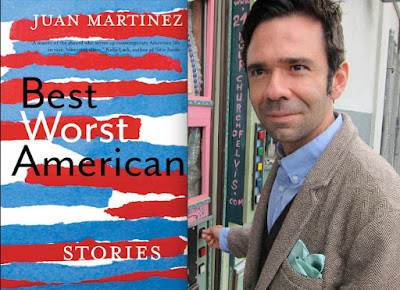 The goal is to cover the entirety of the office door with drawings, but there are rules, the most important of which is that I only get to draw on days I’ve revised or written. The other important rule is that I can only draw on Post-Its.

Also, I’m not allowed to draw anything that’s in any shape way or form related to what I’m writing. I did not know that was a rule until I drew something that was related to what I was writing and—the moment I was done doodling—the part of me in charge of these things knew I had crossed a line, and I crumpled that Post-It and tossed it into the blue “We Recycle” bin that the university supplied me with, and I drew this haunted pantsuit 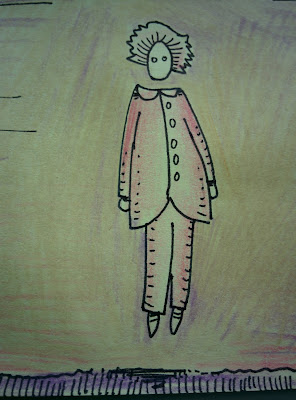 which was not writing-related but 100% election-anxiety-related. I suppose a lot of the drawings are negotiating some anxiety or other. I drew this dude shortly before having to do a reading: 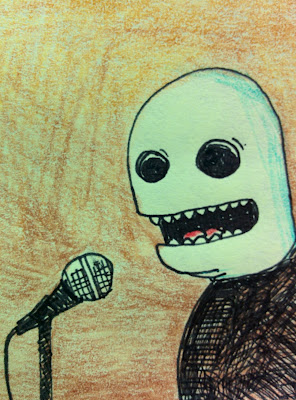 And I’ve noticed that a lot of my drawings attempt to mess with Chicago’s scale. I had never lived in anything as massive as Chicago before I moved here. So I put the Willis tower in a bag. I drew a blackbird that dwarfed the tower. 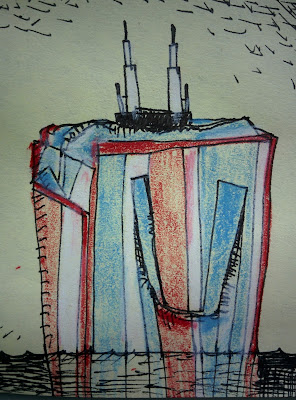 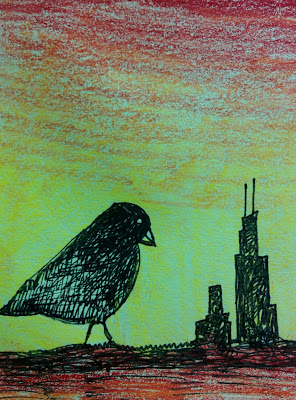 Those I can explain. I can also explain this cow: 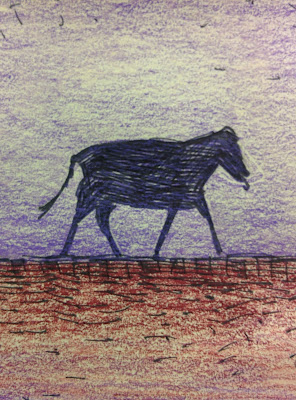 I drew it on the day a cow broke free from a slaughterhouse and down a St. Louis street. Easy!

But I don’t know why I drew a giraffe driving a tank: 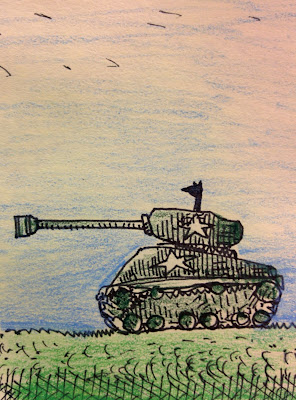 I’m pretty sure I meant to draw a goose driving the tank, and I messed up the neck and thought, Oh well, It’s a giraffe now. But even so. Why a goose? Why a tank?

And why did I want to re-do the Tischbein portrait of Goethe with Goethe as a handsome pig? 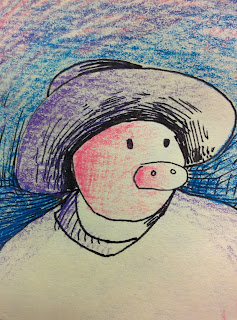 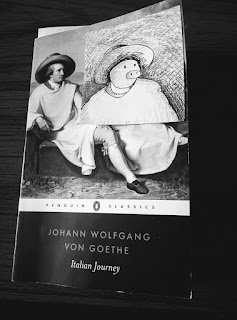 I love to draw. I’m not alone. Goethe himself was an inveterate sketcher, as I learned from the Italian Journey. We draw, all of us. You too, I suspect. We mostly draw or scrawl on the margins -- during meetings, maybe. Or maybe when taking notes or waiting for an appointment or as a final desperate measure to stave off boredom once our phone battery dies off and we’re still in the waiting room. We reward ourselves with these little creative acts. We all do it, I’m sure. And we all grow frustrated with our efforts, Goethe included: “I can see clearly what is good and what is even better, but as soon as I try to get it down, it somehow slips through my fingers and I capture, not the truth, but what I am in the habit of capturing.” Don’t we all? Goethe reminds himself of his steady improvement, however, of the power of practice.

The drawings on the office door do serve as a reminder and a tally. All art, all creative work, is built out of accretion and repetition. You do a little bit at a time. You write a scene. You tear a page and try something else. You see what sticks. You do your work for the day. It all adds up, you hope. 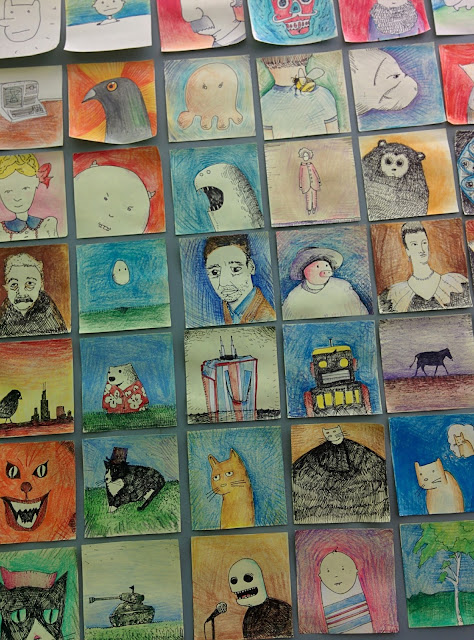 In the second in a series of posts on 2017 books entered for The Story Prize, Henry Alley, author of The Dahlia Field (Chelsea Station Editions), explores how going through his files feeds his creative process. 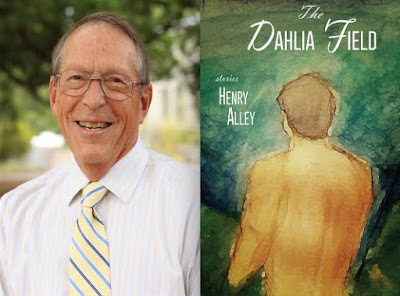 It is as though when beginning a piece, I need to take time off immediately and thrust myself onto the back roads of notebooks, old letters, post cards, family photographs, photostats of old newspapers and even phono albums, tapes, and CDs. I have often thought that a story is what happens when you are thinking about something else. After I start a piece, the main point is, I keep adding to the archive, because the distraction brings on those important, apparently irrelevant details and associated words, moods, and characters. 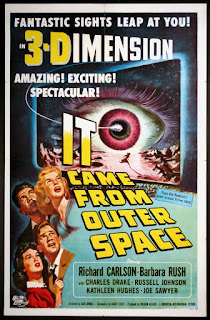 When I was a child, my parents gave me a box Kodak camera. I still have the album I kept during that time, from about 1952 to about 1956.  In it, there is a snapshot of the Liberty Theatre in Yakima, Washington.  I took it while I was on one of my father's trips he made as a shoe salesman. In looking at the photo, I remembered seeing It Came from Outer Space at the time, even though the marquee featured another film. Eventually I found the newspaper ads for the film, which I clearly recalled from 1953—Xenomorphs from Another World. There was the thrill of having a boulder come out of the screen and into the row just in front of me. The movie was in 3-D, and was well acted and well made, and the plot, in my mind, began to parallel the one I had in mind for the story. I started to see that the distance-remembering narrator carried with him the sense of being alien to the world of standard male expectations and that the brother of his stepfather had been consumed by them. The narrator finds a reconciliation by switching from his actual father, who has gone mad with the militarism of the times, as well as the scars of World War II, to his new stepfather, who was once harsh and has learned how to be tender.

All this came up while I was doing research during the course of the story, "Girl on Ice," which is in my collection, The Dahlia Field. Once again I found the most important sleuthing happened in the midst of composition. It was like being on a treasure hunt. Eventually, the poster of the film of 1953 led me to look at certain newspapers in that era, ultimately pointing to the work of combat photographer Al Chang, who took the visionary photo of one soldier comforting another during the Korean War, which appears in the collection The Family of Man. The inexpressible tenderness and compassion caught in that photograph also became a kind of road map for how the narrator could work himself out of his conflict with his father and with the American macho that was part of his upbringing.

One seed from an archive has led to other stories and in one particular case, a novel. I have all my saved letters—those I received and wrote myself—all organized in trays in my study, each tray spanning one to three years. When I was sorting through them one day, I found a letter from my mother written in 1964, when my father had had his first heart attack and was recovering in the hospital. He had been there some time. The letter was in response to my question about what she was doing—in other words how her days went. With decades separating me from that time, I found myself reading with great fascination the description of the life of a woman who had been engulfed for years in the concerns of others but now had something of a private world of her own—sleeping late, writing letters, helping out at the family shoe store, having dinner with friends, doing book-keeping, all while, of course, visiting my father. The recovery, after thirty years, of this disclosure of a realm of a woman newly out on her own prompted me to write my last novel, People Who Work, whose heroine finds, under similar circumstances, a sense of psychic and vocational direction in the late 1960s, as paralleled by her son, who is doing the same by struggling in school and coming out as a gay man. This letter thus inspired me to write about my favorite subject, which permeates The Dahlia Field as well—people who are just getting on their feet, no matter what their age.
Posted by The Story Prize at 10:46 AM

In the first in a series of posts on 2017 books entered for The Story Prize, Sofia Samatar, author of Tender (Small Beer Press), shares some pearls of wisdom. 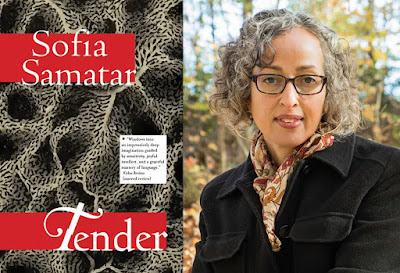 “For me, it all begins with a notebook: it is the well I dip into for that first clear, cool drink.”
~ Rita Dove

“As in everything, so in writing I am almost afraid of going too far. What can this be? Why? I restrain myself, as if I were tugging at the reins of a horse which might suddenly bolt and drag me who knows where. I protect myself. Why? For what? For what purpose am I saving myself?”
~ Clarice Lispector

“And why don't you write? Write! Writing is for you, you are for you; your body is yours, take it.”
~ Hélène Cixous

“I shall not finish my poem.
What I have written is so sweet
The flies are beginning to torment me.”
~ Hafez

“God keep me from ever completing anything. This whole book is but a draft—nay, but the draft of a draft. Oh, Time, Strength, Cash, and Patience!”
~ Herman Melville

“I’m always astonished whenever I finish anything. Astonished and depressed. My desire for perfection should prevent me from ever finishing anything; it should prevent me even from starting... This book represents my cowardice.”
~ Fernando Pessoa

“I write only for my shadow projected by the lamp onto the wall. I need to introduce myself to it.”
~ Sadeq Hedayat

“Writing is my health.”
~ Sylvia Plath

“Of course there is no more beautiful fate for a story than for it to disappear...”
~ Franz Kafka
Posted by The Story Prize at 9:02 AM