Book Design: Flipping Through Pieces for The Left Hand 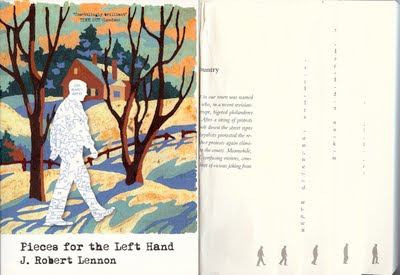 We've received 76 entries for The Story Prize. Thanks to all who submitted books. That's a lot of short story collections, and we have our work cut out for is in the weeks ahead as we prepare to choose our finalists early in January.

Many of the collections we've received are well-designed. A few, in particular, stand out. One of these is J. Robert Lennon's Pieces for the Left Hand, published by Graywolf Press. The paperback book has an appealing small trim size. The cover is a paint-by-numbers image of a walking man that suits the contents well. On the bottom right corner of each page is a silhouette of a man in different stages of walking (I had to mangle the book a bit to scan in all five figures), and if you flip through the pages he glides through the motions. (This isn't the first time a literary work has used the flip book concept. The last 12 pages of Jonathan Safran Foer's 2005 novel Extremely Loud and Incredibly Close also makes use of this device.)

According to Erin Kottke, marketing manager at Graywolf:

"The idea for the walking man (the flip book part) came from Ethan Nosowsky, our editor-at-large and the editor of John’s book(s). Actually, the walking man itself was his idea. John immediately liked both ideas. After we decided on the figure, Rachel Holscher had an illustrator [Matt Schuler] draw it to match the image on the cover, which was Kyle Hunter’s (the cover designer’s) invention."

Author J. Robert Lennon, had this to say:

"The original 'walking man,' when flipped, looked a little like he was doing a moonwalk—we had the artist go back and add a couple of 'frames' to make the walk more natural.

"Graywolf originally presented me with two possible covers—one of them had the 'walking man' strolling across a musical staff...the background was a photograph of a hand, I think. I didn't like it—it was too representational, too much like one of those CNN graphics that try to get every element of the news story into the picture. The cover we went with looked great to me—almost like something Scandinavian, from the seventies, if that makes any sense. It had an aura of ad hoc mystery to it, which I think represented the contents quite well. The image, as I'm sure you've been told, is from the Smithsonian paint-by-numbers collection—something I hadn't known existed.

"I think the whole package is just perfect, and I know the sales have exceeded Graywolf's expectations—I think it has a lot to do with the size and style of the book, the way it feels like a literary artifact, rather than merely a collection of writing."

In my view, Graywolf did a great job with this book. While big commercial publishers often solicit the author's response to cover designs, one of the advantages in working with small presses is that they're often more responsive to author ideas and more willing to take chances.

By the way, beyond its clever packaging, Pieces for the Left Hand is an interesting collection of 100 very short stories, well worth reading.
Posted by The Story Prize at 8:46 PM