In the 42nd in a series of posts on 2017 books entered for The Story Prize, John Shea, author of Tales from Webster's (Livingston Press), discusses sources of inspiration that include a Robin Hood movie, the Hardy Boys, and riding the subway. 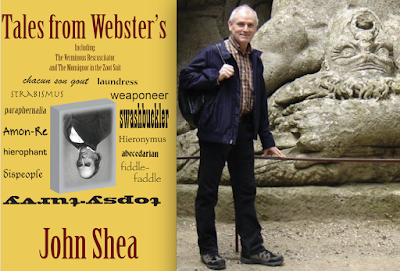 I grew up among books. My parents were readers, and the love of books certainly carried over to me and my younger sisters. In some ways, though, I owe my start in creative writing to the nuns of Marymount International School—and Errol Flynn. It was in third grade, I believe, while my family was living in Rome, that the school decided that one of the monthly assemblies would be given over to an airing of the classic The Adventures of Robin Hood. My earliest memory of writing outside of schoolwork was developing a short (very short) story involving Robin and his archenemy, personified by Basil Rathbone. At least as important was a drawing, my attempt to recreate their classic duel on a castle stairway. My materials: pencil and paper, cut into very small pages. That booklet no longer exists, but I’m confident I adhered to the film’s plot and had Robin win. It was only many years later, when I had heard about Mr. Flynn’s worldly adventures with many women, that I realized the irony of those chaste Catholic nuns showing us youngsters one of his movies.

My next inspiration for writing was much humbler: The Hardy Boys detective series. I still have one or two of my booklets in that genre—indeed, I used the names Frank and Joe Hardy as well! Perhaps a little angel warned me because I then wrote a couple of stories about young brothers with different names. The next step, as a budding author, was to write little mysteries or adventure stories using the names of the boys in my class in Notre Dame International School. I figured that might be a way to attract an audience. And it was. We gradually developed a small circle of grade-school writers. On the other hand, you had to be careful: If I had one of my classmates humiliated or even knocked off, chances were that “John Shea” would come into some equivalent trouble in my friend’s story. I think it was in part a way to bolster ourselves in a foreign country, keeping our own language alive and well. At the same time, we could experience the vicarious thrills of adventures, mysteries, and science fiction.

Fortunately, although I continued to read and enjoy stories and novels that had little resemblance to my own life, I eventually began to write more contemporary, realistic pieces. While I was in graduate school at the University of Pennsylvania, for example, I got a terrible haircut in the student union, thanks to an Italian-American barber who may have been somewhat deranged. Among other things, he tried to persuade me that women in art always looked more beautiful when they were being killed. Once I had escaped from his scissors, I was able to turn the experience into a short story. My first story published by a national journal had its origins in an encounter with an attractive neighbor. At one point, bumping into her outside our apartments, I learned that she had recently returned from a vacation in Italy and had enjoyed meeting a handsome Italian man. The problem: He was writing her letters, in Italian, and she couldn’t read them. That brief meeting started me thinking: Why not shape a story in which a young man, unattached, volunteers to translate love letters written to his attractive neighbor. And what might happen once a pattern started? It was only when I was deep into the writing that I realized the story had a Cyrano de Bergerac angle.

I’ve found that even the prosaic, everyday world can sometimes provide a start for fiction. Having spent many years using the Philadelphia subways, I one day came up with a twist: What if a commuter gets stuck in one of those full-length turnstiles and the efforts of police and firemen to release him are not working? And if his secretary comes by with papers for him to read in the meantime?

My friends have noticed that I often have a little notebook and pen handy—when I was at work and when I’m at home or visiting. I’ve found it very useful to jot down ideas or even phrases and words: I never know when some random thought or some particular happening in the world will help inspire me to write. And when I’m at a loss for ideas, I find it useful to turn to these notebooks and hope something there will start me going.
Posted by The Story Prize at 2:07 PM