In the 44th in a series of posts on 2017 books entered for The Story Prize, Matthew Pitt, author of These Are Our Demands (Ferry Street Books), discusses learning how to nail an audition—and how it applies to his writing. 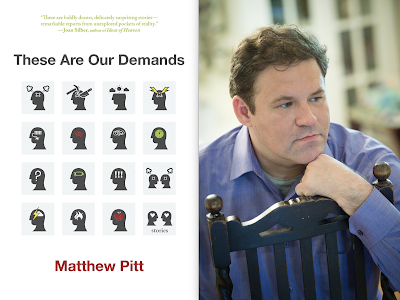 In my life, I’ve been compared to a musical diva exactly once—and not because my singing was like buttah.

It happened during final callbacks for a play I really wanted to take part in. Actually, there was one lone part for performers with Y chromosomes (this was at Smith College), and the play itself wasn’t the thing: What I wanted was to work with the professor directing the production. I’d heard he ran rehearsals with an improvisational mindset; that each exercise and read-through was spirited, challenging; that you could count on discovery each day.

This professor gathered the lucky few who’d emerged from first auditions into a circle, gently describing what he hoped we’d aim toward that evening. Did we have questions? “I’ve got one, John,” I piped up (his name is John). I pulled a small, purple orb from my jacket. “Have you heard of this fruit? It’s a muscadine. My roommate from Georgia grows them in her yard and brought some back. It’s a form of grape, but what’s interesting is, you can’t simply chew it like a grape. The skin is too, well, tough. To eat one you have to pierce the skin, then suck the pulp and juice. It’s quite a process. And that pulp is delicious to us but poisonous to certain animals. Anyway, do you know it?”

Wordlessly John moved to the wings, re-entered with an outsize wave (transforming our group into casting directors), and sauntered to stage center, where a folding chair awaited. While walking he pantomimed chewing invisible gum, mouth masticating extravagantly as if it belonged to a bovine. He peered at us quizzically, then himself, innocently (“Something the matter?” was the subtext). After giving a thumbs-up, he stretched the “gum” into a thin strand, rolled it, and plugged it under his chair. “Know why Barbara Streisand did that?” he asked. “Same reason you just told me that story. You know now I’ll never forget you.”

Of course, he was right about my story then and continues to be, in those I tell today. Whenever I flip through a notebook, scouting for material with potential, something like Streisand’s entrance insists when I have an actual, active story in my sights, rather than some dull scrap capable of singing a few pretty bars back and little else. The rare notion in my notebook that nails its audition is the bracing one. The perplexing one. Such notes take many forms: a character wearing a predicament like an illusionist’s straitjacket; a tone chiming out misaligned from its setting; dialogue pledging to tell a secret, or better still, withhold it at all costs. The common denominator is that they somehow both conjure and contest a familiar melody, moving into uncharted waters and pitch that cannot be circumscribed. You know, like divas do in their renditions. There is an uncouth, maybe even unprofessional, quality to such notes. But their depths are obvious from one glimpse. So too is the sense, equally entrancing and aggravating, that it will take reams of artistic patience, and indirect and delicate methods, to access the fruit under the skin. These are notes, in theatre and improv parlance, that aim not to please, but push ahead: “Yes, and…”

A postscript: Those callbacks were like no other auditions I’d been through before. They enlivened and exhilarated me. And…I didn’t get the part. But I did wind up with a future acting teacher in John, Tai chi coach, a man who brought me to Javanese puppetry, commedia dell’arte, and later, served on my creative thesis committee. John at first was hesitant about that last role, but I told him I wanted my fiction to improvise the same way he encouraged me to onstage. Awareness is awareness, no matter the form of art being enacted. After my thesis defense, on my way out the door, John entreated me to be sure and write to him.

“No.” He gripped my wrist, a grip I still feel writing this sentence. “Not right away. Write me much later. Write me at the moment I would have thought you’d forgotten me.”

I’d say more, but this moment seems to have moved into endings, a topic for another time. So dear, John, consider this your latest letter. I haven’t, I hope, forgotten any of it.


*So far as I know, no recording exists of Streisand’s audition for viewing or confirming pleasure. But several accounts of it have been written, including one in a book by the late Michael Shurtleff. The consensus seems to be that the gum Streisand gnawed away at was imaginary.
Posted by The Story Prize at 2:43 PM