The 2009 Whiting Writers' Award Winners Get Money And Advice 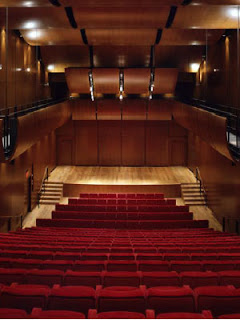 If you're a writer and you have a book or play or two under your belt, you might want to answer the phone if it rings some time toward the end of September. That's when the Whiting Writers' Awards calls to notify its ten winners, each of whom gets a generous $50,000 check.
Unlike The Story Prize, Whiting Award winners aren't required to attend the ceremony, but nearly all of them do. And, sure enough, ten authors sat perched on ten folding chairs stage right on Oct. 28 at the Morgan Library auditorium in New York for the 25th annual ceremony. They were: poets Jericho Brown, Jay Hopler, and Joan Kane; fiction writers Adam Johnson, Nami Mun, Salvatore Scibona, and Vu Tran; nonfiction writers Michael Meyer and Hugh Raffles; and playwright Rajiv Joseph.

And ceremonious it was. As the audience, which included authors, editors, publishers, and agents sat in rows of red velvet seats that quickly ascend to a height far above the stage, each Whiting Award winner had his or her moment in the spotlight. As is customary, one by one, they stood by the podium listening as Barbara Bristol, director of the Whiting's writing program, read out their diverse and illustrious biographies. Some honorees nodded their heads approvingly or gestured to affirm a quirky fact. For instance, Johnson did, in fact, earn a degree from McNeese State University; Mun covered her face when it was revealed that she had once been a street vendor and Avon Lady; Raffles actually is compiling a book of essays on human-insect interactions; and Scibona pumped a fist at the mention of his publisher, Graywolf Press. Most appealing of all may have been Kane, who was convincingly pregnant and tottered on high heels that must have been truly difficult to balance on as she listened to her own rather interesting story.

Until the writers walk onstage, you don't know who the winners will be. And since they are emerging writers, most are unrecognizable, so you have to wait until they're introduced to find out their names. The list of winners is a closely kept secret, but the authors are allowed to share the news with family, editors, and agents. So when I see agents or editors I recognize among the crowd, I generally assume they're in attendance because one of the winners is an author of theirs. For instance, agent Amy Williams of McCormack & Williams and Riverhead Press editor Megan Lynch, were there on behalf of Mun.

Each year, an illustrious guest writer gives a keynote speech, generally offering inspiration and/or advice. This year's speaker was Margaret Atwood, who reeled off a string of jokes as sharp and funny as any opening monologue you'll hear on late night television. One riff presented a list of unlikely mashups of literary classics and occult/horror subjects, which culminated in War and Peace and Heads That Grow Out of Your Armpits*. But Atwood had advice to offer, too, and pivoted to face the cluster of writers several times, pausing and peering over the top of her reading glasses to emphasize a point of particular importance.

A reception followed the event. On the way out of the auditorium, ushers handed out press releases with the list of winners and the biographies we heard. The Whiting Writers' Awards is a well-organized and idiosyncratic event, with a charm all its own, and this year was no exception. Some of the writers are likely to go on to great careers, but as speakers emphasized several times, that's not the point of the award. Rather it's to give a budding artist (not necessarily a young one) a chance to grow in his or her own way. And what better fertilizer is there for that than the support of peers and a nice fat check?

* Corrected 10/31. I mashed up two of Atwoods mashups (Jane Eyre and the Creature from the Black Lagoon and this one) to produce the incorrect Jane Eyre and Heads That Grow Out From Under Your Arms. However, in today's climate, these are all good ideas worthy of substantial advances.
Posted by The Story Prize at 1:53 PM