Some True Stories About The Story Prize 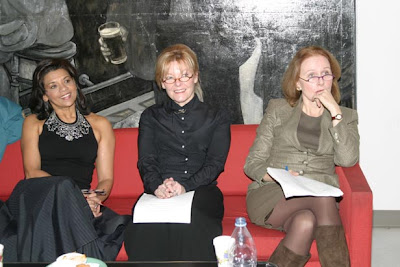 On March 3, The Story Prize will announce its sixth winner at the New School in New York City after finalists Daniyal Muenuddin, Victoria Patterson, and Wells Tower read from and discuss their work on-stage. In the meantime, here are some little known facts about the early days of the prize:


We almost called it The January Prize.
Julie Lindsey and I started to discuss creating a book award in April 2003, and one thing we had to figure out was what to call it. My plan was to announce our winner in January, because there were no other major book awards that month. So I suggested calling the award The January Prize. I thought the name had a nice ring to it. Fortunately, we settled on a more descriptive name. As it turned out, after the first two years we moved The Story Prize event to February, then last year pushed back into March. This has given us more time to read the books and to promote the prize. If we'd gone with The January Prize, we wouldn't have had that option.

Actors performed the finalists' stories, as part of Selected Shorts, at our inaugural event.
On Jan. 26, 2005, we had our first award event at Symphony Space as part of the Selected Shorts series. Jane Curtain performed "My Shape" by Joan Silber, Kate Burton read "Circus People" by Cathy Day, and Sonia Manzano (Maria on Sesame Street) read "The Book of Miracles" by Edwidge Danticat. (If you tune in to Selected Shorts on NPR, you might still hear these stories now and again.) At the end of the evening, Julie announced the winner, and Edwidge Danticat, pregnant with her first child, came up to the stage to accept The Story Prize.

We revamped our program to put the emphasis on the authors.
Although Selected Shorts was a prestigious partner for us, we decided to have our event elsewhere for several reasons. The main one was that we felt that the authors should be a bigger part of the event. The audience had caught only a fleeting glimpse of finalists Joan Silber and Cathy Day, who came up on stage and gave a wave to the audience after the performances of their stories. We wanted an event that featured the authors, not actors reading their work. We settled on our present format—author readings paired with on-stage interviews—and spent a few months checking out venues throughout Manhattan before someone steered us toward The New School. Robert Polito, Director of the Writing Program, graciously offered to host the event. This year's program, on March 3, will be our fifth at The New School's Tishman Auditorium, with the same format we've been using since 2006.