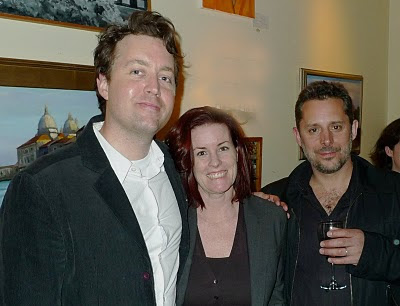 The finalists for The Story Prize (L to R) Wells Tower, Victoria Patterson, and Daniyal Mueenuddin (the winner), had lots of interesting things to say, both on-stage and off.

Mueenuddin for instance, told me in a private conversation that he built and oversees a school for some 200 children from around the village where his farm in the southern Punjab region is located, partly as an alternative to the fundamentalist madrasas that are popping up all over his native Pakistan.

On-stage, Patterson confessed that in her struggles to find time to write she would sometimes leave her children in the church school on Sundays and sneak out to go home to work (earning an undeserved reputation for piety).

Tower discussed seeking a magazine assignment to write about carnival people, in the hope of proving the stereotype wrong. Instead, however, he found carnies to be every bit as unsavory as they are reputed to be—maybe more so (as in his story "On the Show").

Thank you Daniyal, Tory, and Wells for being a part of The Story Prize's sixth award night.

Here are some links to coverage of the event:
Adendum: More press...