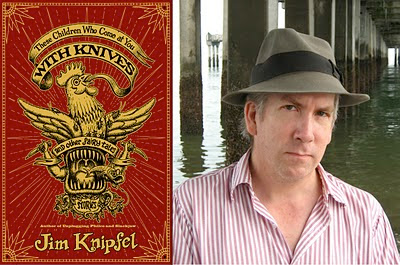 In the 12th in a series of posts on 2010 short story collections entered for The Story Prize, Jim Knipfel, author of These Children Who Come at You with Knives (Simon & Schuster), answers a couple of questions about what first inspired him and how he works.

What book made you want to become a writer?
Growing up, I found myself in the uncomfortable position of being an avid reader in a small Midwestern town. There weren’t many bookstores, and the public library—at the time anyway—was subpar. So I read whatever I could get my hands on. Non-fiction, mostly: science, history, news magazines, the encyclopedia.

About the time I was 12, a tiny used bookstore opened in a local strip mall, so that’s where I began hanging out. The selection wasn’t great, but I found an occasional accidental prize. One day I came across a tattered hardcover edition of Henry Miller’s Black Spring. It cost me fifty cents.

I knew very little about Miller at the time. I recognized the name, and knew he was controversial, that he was supposed to write dirty books. Being 12, that was enough for me.

Now, up to this point I’d been reading mostly in order to learn things. Hard facts. Then I opened Black Spring and began reading the opening piece, “The Fourteenth Ward.” By the end of the first page I was drunkenly giddy—I was physically excited by what could be done with words. I’d never read anything like it before. The words themselves were simple, but they flowed with a rhythm that was both beautiful and tough. There were no facts here, just impressions, but those impressions were as truthful as anything I’d read in a science book. Plus he cursed. For the very first time I read something that made me think “I can do this.”

It would be another decade or more before I did anything about that impulse, and even then I fell into writing as accidentally as I had stumbled upon Henry Miller.

Despite that initial, youthful reaction, I never have been able to write like Miler, but I still owe him a debt of gratitude, and that tattered copy of Black Spring still sits in a place of honor on my shelf.

What is your writing process like?
I was a journalist for many years. As opposed to books, when you write for newspapers you’re often dealing with deadlines measured in hours—even minutes—instead of weeks. You learn to write fast and clean, knowing you can’t worry too much about niceties like “revisions.” That carried over when I started writing the books. To this day I prefer to write in marathon style—I set aside a block of time, and let everything else fall by the wayside for the moment. I get up at six, have a couple cups of cold coffee and a couple smokes, then sit down at the machine and type straight through, eight or ten hours a day, first page to last, until I’m finished. Working that way, I can usually have a first draft in two weeks or less. The rest is cosmetics.

That’s the way it works with the novels and memoirs, anyway. These Children Who Come at You With Knives was a different case, seeing as it was a collection of stories and not a singular whole. So in this instance, I wrote a story a day and concentrated on that story for however long it took to finish it. If it took three hours, I stopped after those three hours. If it took ten, I wrote for ten.

There are a few other little quirks that have developed over the years. I may do months of research before typing the first word, but usually not. And in most cases whatever research I have done is completely ignored once the typing starts. It’s better, I’ve found, to go into stories like these cold, with as little prepping as possible. Fewer constraints that way.

Most important of all, though, is the soundtrack. Each book has it’s own. A single piece of music, a single album I listen to exclusively for however long it takes me to write the book. It sets the tone and creates an atmosphere within the apartment. It’s almost a conditioned response or a form of hypnotism; as soon as I hear that particular music, I enter the world of that book. That’s why it’s so important to choose the right one. As in a movie, the wrong soundtrack can throw everything off. Knowing that, it often takes me longer to choose a soundtrack than it does to write the book itself.

In the past I’ve used Philip Glass, The Residents, Dick Dale, Fats Waller, and Max Steiner’s score to the original King Kong. In the case of These Children…, the soundtrack was Bobby Beausoleil’s electronic piece, "Lucifer Rising," which was directly associated with the book on several levels. It worked quite well.

Once a book’s finished, I can never listen to that music again.
Posted by The Story Prize at 5:50 AM