In the 50th in a series of posts on 2010 short story collections entered for The Story Prize, Angie Chau, author of Quiet as They Come (Ig Publishing), runs through the writing process for one of her stories. 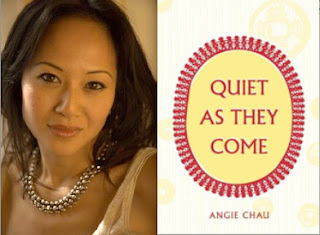 One of the stories in my collection, “A Map Back to the World and into Your Heart,” is about a man desperately trying to win his wife back. Once a philosophy professor in Vietnam, he is now unemployed because he pulled a knife on a co-worker for talking smack about his thirteen year old daughter. He's freshly fired from his post office job, and his wife, who formerly graced billboards in the old country, is now the breadwinner in the family. This role reversal has led to a distancing between the two and a diminished love life. She is now always complaining about the mess of their house, the domestic realm he is supposed to be responsible for. One day, in a foolhardy attempt to win back her affection, he buys a thousand dollar Kirby vacuum from a door-to-door salesman. He thinks this top of the line vacuum can clean it all up, make order of things, can suck away all the sadness, and disappointments and loneliness of their news lives. The thought of it is both funny and tragic. In the last scene, after she has stormed off, we find him shuffling these dust filters about on a table forming the shapes of constellations he once stared at as a young man, now looking for some glimmer of hope to follow.
Readers seem to frequently ask whether a certain story is true to life or not. They like to know a writer’s process or a writer’s inspiration. I wanted to talk about this story to give a glimpse into the writing process, at least for this particular story.
First off, I wanted to write a story about the wacky things we do for love. I had an ex-boyfriend who toward the end of our relationship indeed bought one of these Kirby vacuums and perhaps with the same intent as Viet, the protagonist in the story. This was the seed of the story. To layer upon this, I wanted to write about that inclination to try to predict or deduce or guess at what your lover wants or doesn’t want, is aroused by or jealous of. I wanted to explore, how far does love go? How finite is it? Can somebody one day wake up and like a switch change and fall out of love with you? There is an element of this in the story as well. Quiet As They Come are linked short stories, and in a previous story we learned that Viet once killed a man to save his wife’s life. As a result, the question arises, given his sacrifice those years ago, how far does her loyalty stretch today?
Finally, as an aside, I was once a door-to-door Kirby vacuum sales girl. I was 17 years old and needed a job in order to save money to go live in Spain for a year. There was a want ad in the newspaper for telemarketers. I went to this random office in this industrial part of my hometown dressed in what I thought constituted “interview” clothes. I had on pantyhose, heels, a skirt, and a blouse. The general manager immediately said, “No, you’re too professional and mature to just be a telemarketer.” He opened a door to a rumbling room where a bunch of teenage girls were in a bullpen with headsets on. Their job was to offer “free” carpet cleaning appointments for people. When the person agreed, then the sales team would arrive. The free carpet cleaning was a thinly disguised attempt to simply get someone into your home so to make a pitch. The general manager told me that as a sales girl, I could make two to five times a telemarketer’s pay. As training, I had to shadow this guy who had a handlebar mustache. His station wagon had bullet holes through the roof and I rode with him from pitch to pitch. He gave me advice like, “You should really grow your nails and paint them red. Your customers will like it. It looks classy.”
Needless to say, I didn’t last long. After my first solo attempt ended up with me spitting out the lines I had learned by heart, while tears streamed down my cheeks, to an empty living room because the client was busy blow drying her hair in the bathroom, I was done with vacuum sales. However, that experience was where I got the technical part down for the Kirby sales pitch in the story. The moral of that story is that, for a writer, everything is ripe for the picking. The job is collaging experiences together in a way that both resonates and somehow makes sense out of this wildly messy thing we call life. Sometimes, I think perhaps the only reason I ever had that terrible two-week job that particular summer was so I could write this story.
Posted by The Story Prize at 5:52 AM