Daniel Orozco on Swoony Exhilaration and the Shuddery Jangle of Expectation

In the 18th in a series of posts on 2011 short story collections entered for The Story Prize, Daniel Orozco, author of Orientation (Farrar, Straus and Giroux) discusses his efforts to avoid "research rapture"  and the experience of reading a good collection, among other topics. 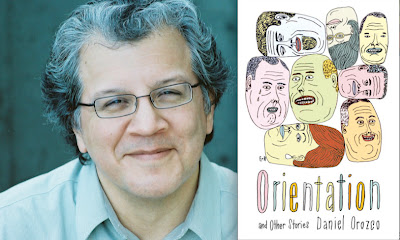 I’m very slow. I noodle and putter. I need four hours to get an hour of good work done. I’m a morning writer. When I’m working on a project I need to go to it every day for at least a few hours. I try to get started before 8 a.m., after coffee. If I don’t get started by then, then I never will and the day is usually shot. My most focused and disciplined work happens when I’m revising, when I’m working over a scene or a descriptive passage. I can do that for hours and hours. But generating material, coming up with that first draft--that is hell for me. I hate about 80% of the writing process, but 20% of it I really love, and that’s what keeps me going back.

What kind of research, if any, do you do?

For “Shakers,” by way of example, two books were invaluable: John McPhee’s Assembling California, a geologic biography of the state; and Bruce Bolt’s magisterial book on all things seismological, Earthquakes. These were foundational sources. I also had several maps of California I referred to: a map of fault lines, a road map, and a topographical map. Looking at these helped me figure out the arc of the story, the “journey” that the omniscient narrator takes all across the state. And I looked up lots of details online: the kinds of snakes in Death Valley, what geophones and seismometers actually look like, stuff like that. E.L. Doctorow has said: Do as much research to convince your reader that you know everything about the subject, then stop. (The stopping is important. There’s a phenomenon called “research rapture,” wherein one lingers in the pleasures of story research in order to put off the actual writing of the story.) This is the kind of work that has to be done for a story like “Shakers.” But I research all stories I write. Dramas must unfold in a particularized world, a world that looks/smells/feels real and true. So even the most mundane settings demand research—a brand name, a species of potted plant, a breed of dog, the right word to describe the color of the sky at a particular time of day, etc. Whatever you’re writing, and whether you’re making them up or not, you have to get the details right.

What do you think a good short story collection should deliver?
There’s a pedantic answer to this question--each story must stand alone as dramatic narrative, yet in the aggregate reveal some unified worldview via a uniquely recognizable prose style, blah blah blah--and all that gets nowhere near the experience of reading. So, I think a good collection should deliver, simultaneously, a swoony exhilaration upon finishing one story and a shuddery jangle of expectation just before beginning the next one. For me the best collections elicit emotional responses which occur not just within each story but between them, in the real-world gap between narrative worlds. That’s where the short stories become a collection.

What book or books made you want to become a writer?

Many years ago, I read a novel by T. C. Boyle called Water Music. It’s a faux-historical epic-slash-romp about an 18th century Scottish explorer, and I was completely taken with it. The level of historical detail in it was mind-boggling, and every chapter ended with a cliff-hanger, and brimmed with words I’d never heard of, like glabrous, and crepitate. And steatopygous. (I still have a handwritten sheet of all the words I looked up.) It was an audacious and thrilling read. I’ve loved and admired many books since then, but this one affected me way before the notion of becoming a writer was ever on my radar. (To want to “become a writer” seemed to me such an act of hubris. What arrogance!) I don’t believe reading Water Music instilled any conscious desire to write. But I do remember the pleasure of its creation—the fun of writing it—seeming to somehow rise off the page. I like to think that did something to me? In some kind of deep, sub-writerly way?
Posted by The Story Prize at 10:50 AM