The Story Prize Event: Get Your Program 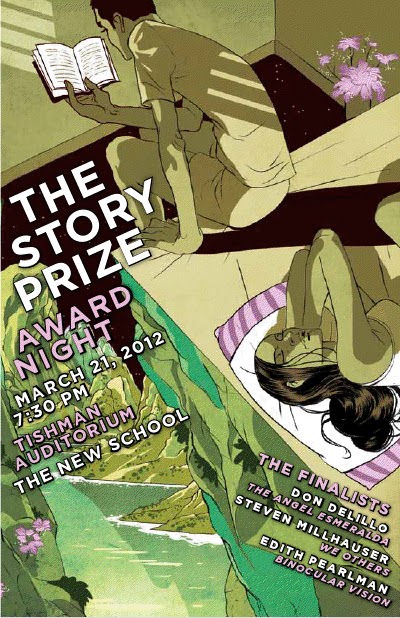 We produce a full color, eight page program for each Story Prize event, and this time, thanks to our designer—Rolling Stone Senior Art Director Steven Charny—an original illustration by Tomar Hanuka graces the cover. Hanuka was one of four artists who helped create the award winning animated film Waltz with Bashir.

To photograph the event, we've enlisted Beowulf Sheehan, who takes exceptional portraits of writers and musicians. You'll see some of the pictures from the event on this blog and on our Web site in the days that follow.

In addition, we've eliminated the intermission to keep the event moving. And we've upgraded the private reception afterward. Once again, leading independent bookseller McNally Jackson will be selling copies of the books.

Of course, we're most excited about our three finalists: Don DeLillo, Steven Millhauser, and Edith Pearlman, who will read from their work and sit down to talk with me at The New School's Tishman Auditorium on March 21 at 7:30. I imagine this will be the only opportunity to see these three great writers at one event. Tickets (general admission $14, student $10) are going fast. Those who can't make it will have to wait for the video that The New School will post a couple of weeks later.