In the second in a series of posts on 2012 short story collections entered for The Story Prize, Aimee Parkison, author of The Innocent Party (BOA Editions), talks about what inspires her. 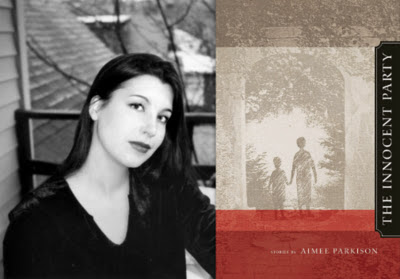 In The Art of Fiction, John Gardner writes that the “fictional dream that will eventually fill the reader’s mind begins as a largely mysterious dream in the writer’s mind. Through the process of writing and endless revising, the writer makes available the order the reader sees. Discovering the meaning and communicating the meaning are for the writer one single act.”

Perhaps this explains why I find inspiration behind my eyelids before falling asleep. My mind reveals strange and beautiful things before I lose consciousness. Who knows what this means? In that moment when the unconscious mind takes over to let the conscious mind rest, images like paintings of people and places appear in flashes. Some of the flashes linger and start to stick to each other, connecting to make stories, dreams. Unfortunately, I sometimes forget them upon waking.

I write from two minds: the unconscious mind that finds surrealist truth in illogical images in the midst of disconnection and the conscious mind that longs for control and wants to make everything logical, creating meaning, even when there is none.

Years ago, I began a story by imagining a lonely woman who has an affair with the ghost of her lesbian lover, who committed suicide. “Dummy” is the only “ghost story” I’ve written so far, yet it’s shaped by reality and the conventions of contemporary literary fiction. In writing this “ghost story,” I learned something about life. I was able to answer questions I had been asking for a long time: Why do people commit suicide, and what happens to those left behind?  I’ve known people who have committed suicide—some of them in my own family—and these are the questions that remain.

This is what my stories are about—not the “damage” of living but what damage makes possible in the lives of survivors. In “Paints and Papers,” an alcoholic artist is attacked; a young boy hits him on the head with a lead pipe. The “damage” to the artist’s brain allows him to paint the world in new ways. Damage is like that—it changes our lives so that everything we see is suddenly altered.

The more I learn from my characters, the more something odd starts to happen. The guilty suddenly appear innocent, and the innocent appear somehow guilty. This is probably why I became a fiction writer—to gain some sort of control over everything that’s raging out of control. I’m a storyteller, attempting to communicate with the heart as well as with the mind. 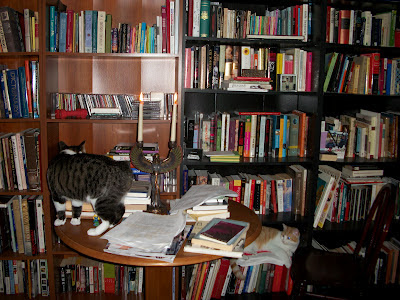 My workspace is an extension of my life lived in rooms crowded with books near cats who like to sleep on books. When I first started writing, it felt like unlocking a secret door. I could go in whenever I wanted, but sometimes I could lose the key. This happens to all writers. We have to go back, to relearn what we thought we knew.

Moral ambiguity changes the nature of “reality” in my book, The Innocent Party. In “Warnings,” a dyslexic teen runs away from home to have a love affair with a divorced sheriff, only to realize her attraction to the sheriff is connected to her missing father and her memories of murder. In her mind, a secret is born. That secret will always be part of her.

I wrote “Allison’s Idea” in a single night in college, after waking from a vivid dream I wrote in longhand. In that story, a group of lonely college girls go on the black market to buy children to keep as pets and learn a startling truth about people and animals. Readers who are parents often ask me about this story. They say it frightens them and that they’ll remember it for a long time. It also frightens me, even though I have no children of my own.

“Allison’s Idea” was birthed on a sleepless night, but the story was born—fully formed. My other stories are sometimes born without hands, missing faces or eyes, without legs. I have to perform a sort of triage to save them; my workspace becomes a narrative ICU to keep damaged, wounded, and unformed stories alive so they can grow and heal in revision.

The mind is a womb, but some stories are born too soon. How does one attempt to save them? Should they be saved?

The shortest time it has taken me to write a story is ten minutes. That story was a flash fiction – a poem disguised as a story disguised as a poem. My story “The Glass Girl” was like that—written fast in a flash of light that came out of a lot of darkness. Very few stories come so quickly, but when they come that way, as flashes, they are gifts.

The longest time it has ever taken me to write a story is ten years. That ten-year story was no better and no worse than the ten-minute story. It was just different—written from a different place, a different mood, and a different state of mind. It was a struggle, a battle rather than a pure flash of inspiration.

Even when I’m most alone, there’s always a sense of community while working, as I read to understand how to write. Brian Evenson, David Foster Wallace, Beth Nugent, Paul Bowles, Jane Bowles, Tobias Wolff, Amy Bloom, Charles Baxter, Lydia Davis, James Purdy, Joyce Carol Oates, and Raymond Carver are my favorite writers. When I first read David Foster Wallace’s “Little Expressionless Animals,” it was electrifying and opened my eyes to all sorts of possibilities about image, tone, mood, character, and narrative architecture. I remember wondering if a writer could get sued for some of the things that happen in a story. I remember wondering if it was risky to unlock the secret door, if that wasn’t what made the act of reading and writing worthwhile.
Posted by The Story Prize at 8:29 PM