Charles Baxter and the Restored Sentence

 In the third in a series of posts on 2015 books entered for The Story Prize, Charles Baxter, author of There's Something I Want You to Do (Pantheon Books) discusses what gets him going and what keeps him writing. 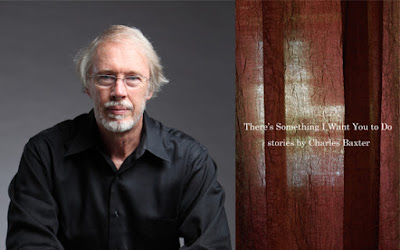 Describe a good writing day.
Time passes, but you don't notice the time because you're so deeply inside the story. You're so hyped up by what you're doing that your palms and underarms get sweaty. It's like a workout or lovemaking, but really there's nothing else like it.

What keeps you going?
The art and the difficulty and the grace of storytelling, and the effort to be a part of its great traditions.

What do you think is the source of your impulse to write stories?
A watchful childhood and what therapists call "hypervigilance" and a love of stories and of being taken away somewhere, anywhere by the power of the imagination.

Where does a story begin for you?
It can begin anywhere, sometimes with an opening line ("She thought he was a decent enough man until she tried to break up with him") or a situation (a paroled murderer moves in next door), or an image (a wheelchair on the beach, tipped over on the sand, and no one nearby).

Describe your revision process.
I rewrite as I go, so I don't really count them up. Sometimes, rarely, I'm in the zone and don't have to rewrite at all. But that's very rare.

What’s the best phrase, line, or passage you’ve had to cut from a story?
"She has the complex dignity of many small town people who do not resort to alcohol until after night has fallen." The magazine that accepted the story in which that sentence appeared refused to print that sentence. They said that the narrator wouldn't know such a thing about that character. I countered by saying that such information is exactly what many small town inhabitants do know about each other. They weren't convinced. When the story was printed in the collection, I restored the sentence. It's still there. The poet Edwin Arlington Robinson attributed his survival to the fact that he didn't start drinking every day until it got dark. I remembered that, and I put it into that story, revised for my own purposes, where it remains.

What surprises you most when you re-read your own writing?
That I was able to do it at all.

If you teach writing, how has it affected your work?
It has made me a Bad Cop whenever I read over what I've done. I'm very tough on myself.

Describe your collection in ten words or less.
It's a decalogue without moralism or didacticism.