In the ninth in a series of posts on 2015 books entered for The Story Prize, John Keene, author of Counternarratives (New Directions), discusses the music his stories evoke. 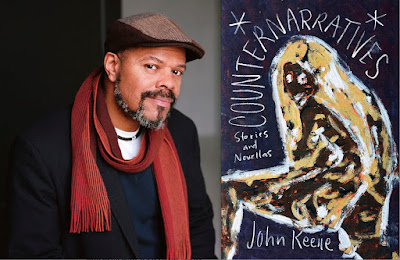 If you were to place any book against your ear, what would you hear? Unless it were an audiobook, very likely nothing behind the sound of paper on skin, along with background ambient sound. One aspect of my collection Counternarratives that surprises me when I reread it, however, is that each story's prose contains an internal music and rhythmicality specific to that text, and both function in complementary, productive ways in relation to the stories' narration. I find myself surprised because when I was writing the stories, I was not consciously considering this element of my prose, yet somewhere in my subconscious, I apparently was scoring and setting pitches. Additionally, among the thirteen stories in the collection, only two specifically explore the lives of musicians, and in only one of these, "Cold," which recounts the final day in the life of the minstrel composer and performer Bob Cole, was I intentionally attempting to convey what the composer's music might have sounded like.

To give some examples of this unanticipated music—by which I mean the combination of sound, syntax, and rhythm—in the opening story "Mannahatta," the music materializes as soon as one reads by eye or aloud. Just as the character Juan Rodríguez is imagining the creation of a new life on the island of Manhattan after deciding not to return to the Jonge Tobias, the merchant ship on which he works, so too do the story's words, its sentences, unfold as if in a rhythm of assembly, fitting together sonically, rhetorically, and rhythmically, to create the scene in which the action occurs. Similarly, in "Acrobatique," the narrative's sonic movement reflects the high-wire-like thought and movement of a late 19th-century black acrobat whom Edgar Degas famously depicted in his 1879 painting "Miss LaLa at the Cirque Fernando." Olga "Miss LaLa" Kaira ascends and descends the circus's interior spaces but also swings, as if on a trapeze, back and forward through time and through the complex social spaces of her era, maintaining her poise and the breath of her storytelling, balancing everything in one long and continuous sentence, almost like a theme with multiple yet non-repeating variations.

In some of the longer stories, the music and rhythms are less obvious yet still surprise me. For example, in "The Aeronauts," which is set during the early years of the U.S .Civil War, the main character, Theodore King, recounts the entire story in retrospect to amuse a group of close friends and loved ones. His narration, in a realist mode, mixes verbal registers, from the vernacular to the technical language of ballooning, and has the pace of a story told in intimate company but that also could be—and is—written down. The music here, by which I mean his cadence of narration, is by turns prosaic and rollicking, and upon rereading the story it impressed upon me how much as I was writing I was hearing Theodore's voice, and not simply my own. Moreover, the rhythms of his narration track his movement geographically and in time, from Philadelphia to the theater of war in Washington, D.C,. and northern Virginia.

A final example exists in "Rivers," which tells the story of the character Jim, from Mark Twain's famous novel The Adventures of Huckleberry Finn, roughly two decades after that book's events took place. In my story, Jim's perspective is preponderant, and comes even later in time, when he is much older and has been invited by a young reporter to recount his experiences in the U.S. Civil War. The reporter begins by asking about his river journey with Huckleberry, but Jim—now James Alton Rivers—decides he will only say a little bit about his former raft mate, and the rhetorical device of praeteritio becomes key. When I was writing the story I was not conscious of how this withholding of information from characters in the story but not the reader established a particular kind of music and rhythm of narration, but on rereading it, they gave me a sense of who Jim—James Alton Rivers—was and is beyond the story's specific facts, and suggested that he might have needed to keep secrets in order to survive, but that he was going to share with the reporter, and with the reader, a few unforgettable stories about his post-raft encounters with Huckleberry Finn. The music of his silence and non-silence, like the book's other subtle tunes, provides another path into the collection's narratives.
Posted by The Story Prize at 7:16 AM