Samrat Upadhyay: Doctor or Engineer? Neither!

In the seventh in a series of posts on 2017 books entered for The Story Prize, Samrat Upadhyay, author of Mad Country (Soho Press), discusses his journey from Nepal to America and from studying business management to establishing a writing career. 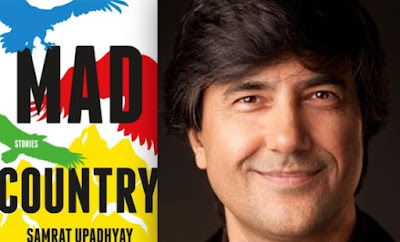 When I visited Nepal in 1987 after completing my B.A. from the College of Wooster in Ohio, a cousin of mine scrunched her nose, as though I’d brought back disagreeable smells, and said, “You went all the way to America and didn’t study something technical?” What she really meant was that I hadn’t chosen a lucrative academic subject, despite studying in such a lucrative country. I sputtered and stammered, and couldn’t manage to convince her that studying English literature was something I wanted to do, that it was a move born of pure love—love of language, of Dickens, and Michener, and Rushdie. The disappointment in her face deepened, and I left the encounter slightly miffed at myself for being such a dunderhead that I’d wasted time writing papers on George Bernard Shaw and penning tiny, awful poems in my first creative writing class at Wooster when I could have been doing something, well, technical. But my self-flagellation didn’t last long, and vanished by the time I boarded the plane back to Ohio, where I commenced on a year-long internship at the college’s news services, where, for a pitiful stipend that barely paid my rent, I wrote feature articles profiling the college baseball team or Ohio Light Opera.

I came to America in 1984 to study business management. At that time I couldn’t even conceptualize a career in literature or writing, even though I was already deeply in love with books and the wonderful worlds they opened in my mind. During my first semester in the U.S., all it took was an accounting class, in which I was bored to tears and in which I failed miserably, for me to know that I didn’t have a management bone in my body. I drifted toward literature classes, and I never stopped.

But the going wasn’t so easy. My early years in America were marked with money problems. During my first summer in 1984, I took a Greyhound bus to Midland, Texas, where an uncle had kindly offered me room and food while I worked. I found work in a fast food place called Grandma’s Chicken. Having grown up in a middle class Brahmin family in Nepal, I had never worked before, had not even done chores around the house. Throughout my childhood, my parents had emphasized education, and there was always a hired help at home to do the cooking and cleaning, even though my family wasn’t wealthy by any means. Yet I hadn’t, as they say in Nepal, “lifted a filament” my whole life, and here I was, thrown into the working world of America.

Since I had no transportation in Midland, I used to walk a mile or so in the Texas heat, in my work uniform, to Grandma’s Chicken. I never got used to my job in all those three months. I frequently over-fried the chicken, I got the wrong items from the walk-in freezer, I confused the orders. One day I was asked to mop the floor. I’d never mopped anything in my life, so instead of using the wringer to squeeze the mop, I clumsily used my hands, which drew much mirth from my coworkers. I was a slow learner. I was often yelled at by the manager, whose patience I taxed with my ineptitude. Sometimes I didn’t understand the heavy Texan accent, which led to even more confusion or laughter.

Now, years later, I still see myself: walking to work in that incredible heat, wiping sweat off my forehead, dreading the faces of my manager and coworkers, jeered at by teenagers in passing cars—wondering if this was my fate in America.

Although I was on a generous scholarship at Wooster, I still struggled to pay the remaining few thousand dollars that I owed the college. I worked hard at the cafeteria, turning into a superfast dishwasher who washed, rinsed, and stacked dishes before they gorged the end of the conveyer belt. I rose rapidly through the ranks of the food services, was promoted to a vest-wearing Student Supervisor. One semester I worked close to forty hours a week while taking five courses; I remember sitting in my classrooms, bleary-eyed, my clothes splattered with food particles and my body reeking of the dish room. Notwithstanding my hard work, my financial troubles hounded me. I was a frequent visitor to the admissions office, where I begged and pleaded with the officials to allow me to enroll in classes for the following semester despite being in arrears. My fiscal woes followed me to Ohio University, where, although on a graduate assistantship at its Scripps Journalism School, I still struggled. I recall the day when a few of us international students emptied our pockets, collected enough pennies to buy one packet of Ramen, and made a large pot of watery noodle soup, which we slurped as we recited Lao Tzu.

But throughout this time, I never regretted my pursuit of literature. Not once did it occur to me to switch to an academic career that would eventually, and literally, pay off. In dormitory conversations, some of my friends, especially those from South Asia, discussed the kinds of professions that’d make them the most money. They never spoke of what excited them; they never spoke of their obsessions, their fervor. I felt alienated from this type of thinking, even though it was something I had grown up with in Nepal. During my childhood, all I heard from my elders was, “Doctor banney key engineer banney?” Now, those Ohioan days of mental anguish seem far away, and I don’t know why I had to suffer for so many years. What I do know is that I’m glad I didn’t allow anyone else’s notions of prestige and profitability to decide my career for me. Now I am professionally engaged in doing two things I love the most— writing and teaching.

I recount this story as a way of illustrating what I found in America: a generosity of knowledge. More precisely, it was the liberal arts education that opened up its arms and allowed me to find my calling. One question that I get asked now often when I give talks in Nepal is: would you have been a writer had you not left Nepal? And the answer to that question is: I don’t know. What I do know is that it was America’s openness, its encouragement of inquiry and experimentation, that became my lodestar.
Posted by The Story Prize at 9:28 AM