Kem Joy Ukwu: Beyond the Ending

In the fourth in a series of posts from authors of 2018 books entered for The Story Prize, Kem Joy Ukwu, author of Locked Gray/Linked Blue (Kindred Books), discusses ways in which even finished stories sometimes remain open-ended for the writer. 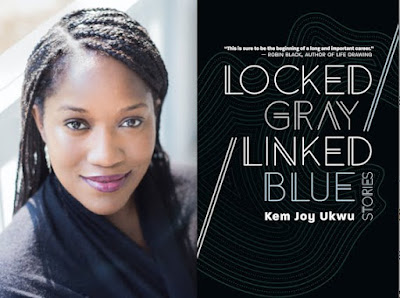 Is the ending of a short story ever its actual end?

The answer is … sometimes. That depends on the writer, the reader, and the story. When the writer and reader happen to be the same person, when a story’s writer eventually becomes its own reader (as some writers read and re-read their work for revision purposes), the short story can be changed, enriched, and continued. Sometimes when reading one’s own work, questions can arise about the characters, plot, and ending that can be answered by more revision or even by writing more stories.

One of my short stories from my collection Locked Gray/Linked Blue was first published in the wonderful Carve Magazine. The short story, “Demetrius,” is about two sisters who will soon part ways, told from the first-person narrated perspective of the younger sister. The story went through revisions after the first draft. After the story was accepted and published, it seemed like I was done with it. The end seemed like the end—there was no more story to tell, no more things to know.


That was only true until my own questions arose about the older sister. What were the events of “Demetrius” like from her perspective? What was parting ways with her younger sister like for her? I wrote a new short story in response to my questions and included it in my collection. I wrote a short story spin-off of sorts, perhaps not a continuation of “Demetrius” but an expansion of it.

For quantity-related productivity, it may be great for writers to have short stories done for good. It can also be good for a short story to be done for now. It is reasonable to edit and revise knowing that after publication the short story might continue.

This prolongation could include even more revision and addition, changing the short story’s length, potentially reshaping it into a new story altogether. It might continue in an anthology, story collection, novella, or novel. It might resume through adaptation into film and television. A short story could move forward in the minds of its readers and in the imaginings of its writer.

Finishing a short story can be amazing because its finality can be freeing. Even when the door of a short story is closed shut and locked, its writer could perhaps unlock and open that door, potentially opening new ways to edit, enhance, and eventually enrich that short story, possibly turning an ending into an entrance.
Posted by The Story Prize at 3:03 PM