In the 33rd in a series of posts from authors of 2018 books entered for The Story Prize, Kirsten Sundberg Lunstrum, author of What We Do with the Wreckage (University of Georgia Press), discusses finding inspiration through a skylight. 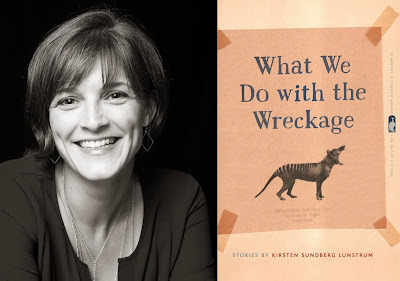 When I was ten, I discovered Orion. Not that spotty character of Greek mythology, but the constellation bearing his name. My family had moved that summer—our third move in as many years—this time to Lincoln, Nebraska. We leased a 1920s era Sears, Roebuck and Co. kit house that—like my family—had been uprooted from its original neighborhood and relocated to a bare plot of land on the low-rent side of town. The house had many charming features (a front porch ceiling painted sky blue, a heavy wooden banister along the staircase—perfect for sliding down, glass doorknobs from another time), but my favorite was the skylight cut into my bedroom ceiling. At night, lying in my bed, I could see Orion through that square of glass. There he was—the hunter—body outstretched, glittering belt and sword at his waist, standing guard in the bewilderingly oceanic Mid-western sky.

Orion the hunter’s mythology is muddy. He may or may not have been the son of a god. He raped a woman and was blinded in punishment. Helios, the god of the sun, restored his sight; but eventually, his bluster and violence led to his death. His body was set among the heavens, where every winter he stalks the sky, hunting there, despite the darkness and the cold.

I didn’t know this story when I was a little girl looking for Orion through my skylight. If I had, I think I would have felt something other than comfort in seeing his shape there in the black square of my night. Instead, I made up my own stories about him—stories more like fairy tales than anything else. My Orion was a hero. He rescued rather than ravaged. He restored rather than wrecked. These stories were the ones I needed to hear, and so I wrote them—not on the page, but in my head—soothing myself through my childhood anxiety with fiction, ordering the uncertainties of the world with narrative.

That year of looking up at that narrow square of sky and finding story is the one that made me a short story writer, I think. My rootless childhood turned me into an outsider, an observer, a seeker of connection—all requirements for the writer. But also required of a short story writer, in particular, is the ability to look at a sky muddled with stars and zero in on the single constellation. What I love about short fiction is the acuity it necessitates, the sharp gaze, the polishing. In writing short stories, I spend a great deal of my time squinting into the vast expanse of possibility, and then narrowing, narrowing, narrowing my focus.

For years, I kept on my writing desk a one-inch in diameter, round picture frame. Inside the frame was a tiny disc clipped from a magazine page, an abstracted bit of image. The point, of course, wasn’t the image itself, but its reminder to cut away everything that didn’t belong in the story. That—as I see it—is the crux of my work in telling stories: to see with clarity the burning center, and then to slice and shear away everything else.

If I were to give advice to my own younger self—or to any new short story writer—it would be to spend more time thinking about how to see the complexity of a whole constellation through the narrow frame of one window.

Now, as an adult, I have left the Midwest and made my home instead in the far northwestern corner of the country. In the winter—when Orion is visible in the northern hemisphere—the sky here is often hidden behind a quilt of clouds. On the rare clear winter night, however, I still find myself looking up and searching out Orion. There he is—Betelgeuse, Rigel, Bellatrix, and Saiph. And, though I didn’t know to look for it as a child, I can now spot the Orion Nebula there, too. From my vantage in my front yard, the Orion Nebula appears to be simply a brighter point in the blade of Orion’s sword, but it's actually a stellar nursery. Looking at it, I know that I’m watching something incredible. New stars are forming up there—light and beauty coming together through a process of collapse and compression and fusion.

The metaphor, I think from my spot on the ground, is just too good.
Posted by The Story Prize at 9:42 AM