In the 38th in a series of posts from authors of 2018 books entered for The Story Prize, John Mort, author of Down Along the Piney (University of Notre Dame Press), contemplates the similarities between writing stories and gardening. 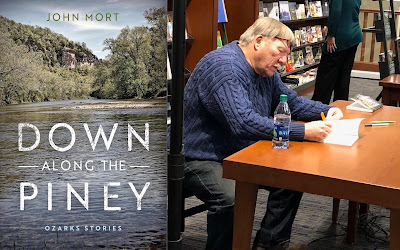 I have a long publishing record but have never written anything that could be called commercial. It’s not that I don’t want to. I think everything I’ve written deserves a wide readership, but this has never happened.

Obviously, I don’t write short stories (or novels) to make money. So why, at my age when I’ve nothing to prove, do I bother?

I believe it’s similar to raising vegetables. Writing and gardening are the two things in my life that have held my interest since grade school. Either endeavor is subtle, minute, and impossible to do perfectly. The best you can hope for is to improve.

I own some acres near a Corps of Engineers lake in western Missouri. The topsoil is thin and rocky but still I can raise potatoes, okra, squash, and tomatoes without much augmentation. Sweet corn will hardly grow and anyhow ’possums will raid it. They know to the day when the corn is ripe and eat off the kernels rather neatly without even breaking away the ear.

I cut cedar poles and constructed a 25’ x 25’ cage, covered it over with wire, and then built up the soil with manure and mulch. I raised one fine crop of sweet corn, watermelons, and cantaloupes before the ’possums figured out how to breach the wire. I tried to raise corn two more years but couldn’t keep the ’posssums out no matter how many staples I drove.

Pretty silly, this old man in an obscure part of the world, battling ’possums.

I lowered the pH in the soil by bringing in peat and spreading sulfur, and planted blueberries. My cage was already barrier enough to the deer and birds, and ’possums don’t appear to care much for blueberries. I’ve had one good crop and am tripling the number of plants this year, but we’ll see. Some other problem will arise. You never quite get there.

I’m saying: You keep writing despite the ’possums. My ignorance is a ’possum, which I try to overcome through reading. Another ’possum is my despair over the state of publishing. Also, I’ll never be William Faulkner.

Nowadays, I wonder whether I’m too old, too rural, too male to fathom the #MeToo movement. Maybe I’m just irrelevant, so why even try? What in the world is a hashtag?

Norman Mailer held little regard for short story writers—and probably wasn’t much of a gardener, either. Nonetheless, using another, familiar metaphor, he nailed why you do it:


The real short story writer is a jeweler. Like most such craftsmen, he does not—unless knighted by genius, as Hemingway or Faulkner—do much else. No, he stays in his shop, he polishes those jewels, he collects craft, lore, confirms gossip, assays jeweler’s rouge, looks to steal the tricks of the arcane, and generally disports like a medieval alchemist who’s got a little furnace, a small retort, a cave, a handful of fool’s gold, and a mad monk’s will.

Mailer opined that the novelist tries to embrace the entire world, while the short story writer bores inward, perfecting a small universe. And yes, that’s it. You’re seeking perfection, however small its compass. Every time your story is rejected, every time you harvest an apt criticism, you hurry to sharpen an image, embolden a sentence, ferret out a redundancy.

I keep at it, prospecting for gold. I want that sturdy blueberry bush loaded down with fruit, and I want to sell blueberries at my roadside stand. I hope, this time, the world will notice.

Mostly, I fail. But I can’t afford to be depressed because once in a while, I succeed, and then I rejoice. My joy is very nearly religious. I mulched and hoed and raked, and all of a sudden—and not by accident—I dug up the truth.
Posted by The Story Prize at 4:31 PM