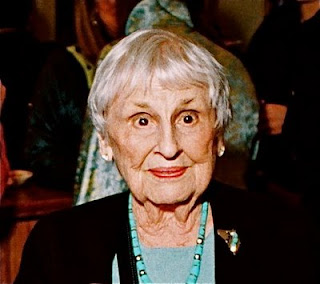 One of the nicest people in publishing and a truly great editor, Carol Houck Smith, died on Nov. 29 in her Manhattan apartment at the age of 85. She worked at W.W. Norton, where her authors included Andrea Barrett, Ron Carlson, Joan Silber, and many others.

The picture to the right is from the reception following The Story Prize event in February 2007.
Carol had particularly wanted to be there that year because one of the finalists was Rick Bass, whose first short story collection, The Watch, she had edited.

Carol was a supporter of The Story Prize from the start, responding with warm encouragement to the announcement of the launch in January 2004, attending a small cocktail party for editors and publishers that spring, and coming to the first event in 2005, in support of her author, Joan Silber, who was a finalist for Ideas of Heaven--a great book made better through Carol's taste and wisdom, as everything she edited was.

I had first spoken with Carol several times in early 2001, when I was putting together Prize Stories 2001: The O. Henry Awards. I had decided to include three novellas* in that volume, one of which was Andrea Barrett's "Servants of the Map," the title story of a collection set for publication in 2002--several months after the O. Henry Awards volume would be out. To my surprise, Andrea Barrett informed me, a few days after I called to tell her that I'd chosen her story for the O. Henry Awards, that her publisher, W.W. Norton, did not want to give permission to publish "Servants of the Map" because they were concerned that it would cannibalize sales of Barrett's collection. In four previous years, I had never had an author or publisher turn down a chance to be in the anthology.

Andrea suggested I speak with her editor. So I called Carol Houck Smith and had a long conversation in which I did my best to persuade her that inclusion in the O. Henry Awards would likely help Servants of the Map reach an even larger audience (a somewhat shaky argument because after winning the National Book Award for her story collection Ship Fever in 1996, Barrett's books no doubt outsold the O. Henry Awards by a wide margin). Carol explained Norton's position, but she also listened with an open mind--something rare in my experience. In the end, Carol convinced Norton to allow us to include the story. I think what may have persuaded her wasn't my arguments but my passion for that particular story, which matched her own.

What I didn't know until later, was that Carol had "retired" several years before this. That didn't stop her from going to work every day and continuing to edit and nurture writers' careers. She was, throughout her career, a tireless advocate for poetry and fiction, a frequent presence at writing conferences, someone who constantly sought out and nurtured new talent, and a trusted editor and friend to many writers. Carol, we're going to miss you--the literary world is going to miss you.

* The other two novellas/long stories that year were Mary Swan's "The Deep" and the full version of George Saunders' "Pastoralia," both of which also ended up being the title stories of collections.

Addendum: Here's more.
Posted by The Story Prize at 5:30 AM