Joe Meno: What The Story Prize Judges Had to Say 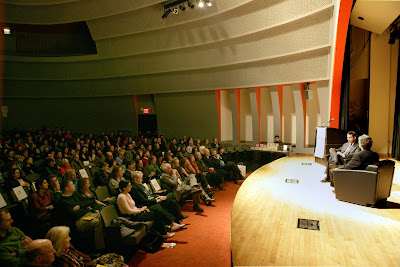 Joe Meno was a revelation to much of the audience at The Story Prize event on March 4. His book, of course, wasn't nearly as well known as those of the other two finalists, Jhumpa Lahiri and Tobias Wolff, but by the end of the evening, the signed copies of Demons in the Spring had sold out. In our onstage conversation, he explained the theme of disaster that runs through the stories in the collection and the significance of the title. Here’s what the judges had to say:

“Playful and moving, inventive and sharp—each story in Joe Meno’s Demons in the Spring takes our understanding of the world and gives it a twist. Wives turn into clouds, tiny elephants sniff out missing children, and miniature cities glow underneath our skin. There are also factual elements—bits about Iceland (a travel guide that includes climate and population), Stockholm Syndrome (a retelling of the events that coined the phrase), and the Unabomber (including his actual mailing address in jail)—that serve as platforms to investigate deeper issues of the soul.

“In lesser hands, these unconventional forms and outlandish leaps of imagination would feel like empty concepts, but Meno fills each of these stories to the brim with heart. There is true emotion hiding behind every trick mirror, and it comes across in spades. As I finished each story, I found myself looking forward to the next, wondering what Meno would surprise me with. But what sets this collection apart, and moved me the most, was that his characters consistently choose hope over despair. Meno brings great skill to every line, and proves, as in his story, ‘The Architecture of the Moon,’ that human connection can be the small light used to illuminate a great darkness.”