Tobias Wolff: What The Story Prize Judges Had to Say 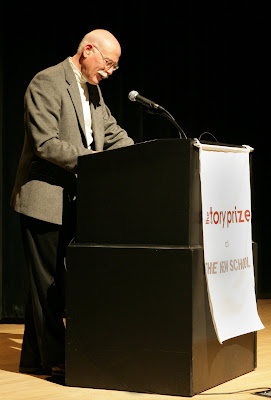 When the judges for The Story Prize make their choices, they also write citations for the book or books they liked best. We include these in congratulatory letters we present to each finalist, along with their checks. They are unattributed to protect the confidentiality of the judges' votes. We're going to share them here because we think they offer insightful and interesting readings of the books. Here's one for Tobias Wolff's Our Story Begins, this year's winner of The Story Prize:

“Our Story Begins will be ranked with the best collections of contemporary American (and Canadian) short stories published in recent—maybe even all—decades. Such writers as John Cheever, John Updike, Lorrie Moore, Mavis Gallant, Alice Munro, John Updike, Eudora Welty, William Maxwell, etc. will be proud to welcome him to their cohort. Well—he's really with them already, but this volume gives him eternal tenure.

“The previously uncollected pieces by Wolff in this new collection show an increasingly severe insistence on the most telling and specific detail as the author creates entire worlds, entire life stories, out of eloquent molecules of narrative. The emotional impact of these lapidary stories is specific and powerful: a teacher facing abduction from the angry Muslim parent of one of her students turns the tables on her captor without much in the way of a sense of victory; a father takes his ‘difficult’ son off to a boarding school and gets lost on the way to and from the place, filling himself with greater dread than he would have imagined possible. The strength of the content of these pieces, whose characters often end up in a kind of cosmic lostness tempered, occasionally, by kindness, should not be taken for granted.

“But it is Wolff's language, which has grown even more elemental and honest and unadorned than it was at the start of his career, that really impressed me here. It sounds almost physically palpable. ‘The factories were derelict’—what a gorgeous clause that is. ‘Neat piles of tall corn flicked past.’ Strict monosyllables. ‘She had no friends except for an equally friendless cousin.’ An entire canvas in a brushstroke. Many of the pieces in the book as a whole concentrate on plans and hopes derailed, but the stories themselves always stay on track, giving order to our lives’ disorder.”