Patty Somlo: On Getting to the Essence of the Subject

In the 57th in a series of posts on 2010 short story collections entered for The Story Prize, Patty Somlo, author of From Here to There and Other Stories (Paraguas Books), on the fixation behind her book. 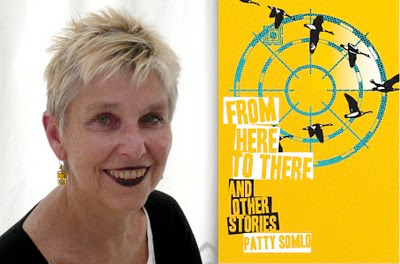 The images haunted me -- men who before succumbing to the awful desert heat left their pants, shirts and underwear folded in neat piles and whose bodies became so dehydrated the men’s fingerprints vanished. These were just two of the gruesome details I learned from reading Luis Alberto Urrea’s book, The Devil’s Highway, about the death of fourteen undocumented immigrants in the Sonora Desert, as they made their way to what they’d hoped would be a better life. I couldn’t shed the sorrow I felt for days. All I knew to do with that sadness was to write.

The first story was entitled, “One by One.” The story serves as a bridge between a place called “Here,” which is the name of the first section of my debut collection, From Here to There and Other Stories, and another place called “There,” the second part of the collection. “One by One” begins on the day when the men’s bodies are being transported through an Arizona town and the local Latino community comes out to honor them.

Soon after I finished “One by One,” I realized I wasn’t done. That’s why I started a second story, “The Fence.” I didn’t know at the time that “The Fence” would be the next piece in what was to become a series of stories, all featuring a poor Mexican farmer named Alejandro. In “The Fence,” Alejandro has walked from his tiny village, located a breath away from Guatemala, to the border between Mexico and the United States. Having dreamt all his life about the splendor he would find on the Other Side, Alejandro is stunned to see that the dry, dusty desert landscape on the fence’s American side doesn’t look a bit different from the land bordering the Mexican side.

When I finished “The Fence,” I realized that I still wasn’t done. I wanted to keep writing about this man and see where the stories might take me. I recalled an exhibit I’d seen many years before at the Asian Art Museum in San Francisco of prints by the Japanese master Katsushika Hokusai. Included in the exhibit were Hokusai’s Thirty-Six Views of Mt. Fuji, wood-block prints of the iconic peak done in different seasons and weather, and from different locations. I realized then that I wanted to write about illegal immigration in the spirit of a Zen Buddhist artist, painting the same brush stroke again and again, to get to the essence of the subject.

Since finishing “One by One” and “The Fence,” I have written nine more “Alejandro Stories.” Four of the stories are included in From Here to There and Other Stories. What I’ve learned from this fixation on the emotional tinderbox of illegal immigration, and the reason I’m still drawn to the subject, is that the stories lead me to themes I never grow tired of exploring -- how one maintains hope in the face of great obstacles and disappointment; the harsh clash between reality and dreams; the arbitrary nature of borders between people, countries and consciousness; and the eternal search for a better life that buoys the human spirit.
Posted by The Story Prize at 7:10 PM