Danielle Evans on Stories That Won't Shut Up

In the 59th in a series of posts on 2010 short story collections entered for The Story Prize, Danielle Evans, author of Before You Suffocate Your Own Fool Self (Riverhead Books), dicusses what she aims for in a collection and her writing process. 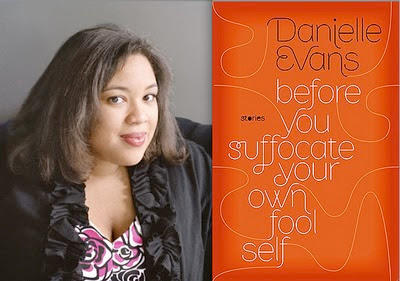 What do you think a good short story collection should deliver?
Several sleepless nights. There’s a frequently misattributed quotation that says the job of a writer is to comfort the afflicted and afflict the comfortable. Insofar as most people are comfortable in some ways, and afflicted in others, the best work does both—reassures us that we are seen, that we may, in our sadness and strangeness and suffering, be less alone than we thought we were, while simultaneously shocking us out of our complacency and reminding us that we are not the only people in the world, that the pattern of our individual lives is not the pattern for everyone. The stories that stick with me the most are the stories that unsettle me because you want to reach into the fictional world and do what should have been done, or because you have no idea what should have or could have been done. In terms of the actual form of a collection, I think the stories in a book should speak to each other without repeating each other. I don’t know that I’d go so far as to say it’s the only form for a collection, but I like to think of a lot of my favorites as circular journeys—you end up where you started, but you’ve seen enough between the first page and the last page that your perspective on the point of origin is different—you are looking at different things, you are asking different questions, you are coming up with different answers.

If you dabble in any other non-literary forms of expression, what do you do and how does it inform your work?
I cook and bake, sporadically. I got through bouts of domesticity and then periods where I am on a first name basis with my local Thai food and pizza delivery people. I learned to cook and bake from my mother and grandmother. My grandmother does not believe in measuring cups. Sometimes I try to explain to people how to make her pie crust, but you can only get so close. There’s probably a decent, if corny, metaphor for reading and writing in there somewhere: You can explain to a point, but after that you have to feel it out for yourself. I also tend to experiment when I cook, which means that if some creative cooking project turns out especially well, I always have this fear that I’ll never be able to make it properly again, because I have no recollection of what went into it, or how much I used of each thing. I feel the same way about fiction, a lot of the time—I’m always going into it without a set plan, and I always have to overcome the panic of “Oh no, what if I’ve forgotten how to do this?” It’s why whenever possible, I write first drafts in a single sitting, so as not to lose sight of what I was trying to do.

Have you ever written a short story in one sitting and not revised it later?
No. I came close with one story in my collection, “Harvest,” but I was 19 at the time, and didn’t know better. I was applying to MFA programs, and I had one story I felt good about, and two I felt OK about, and at the last minute I decided I couldn’t mail my Iowa application with those two stories I only felt OK about, so I had this brilliant idea that I’d replace them with two stories I would write in the 72 hours before the application was due. I’d had an idea for one of the two stories, and I wanted to write it anyway, so I thought I’d use the application as a deadline. I was at my mother’s house for a school break, and after expressing reasonable skepticism about the wisdom of this plan, she gave up, brought me a cup of tea, and left me alone to write. I got it done, and back in the city, mailed my application from the 24 hour post office, an hour before the postmark deadline elapsed. One of those stories I submitted was clumsy and awful, to the point that I’d like to break into Dey House and steal it from my application file if it’s still there, but the other was “Harvest.” It ended up being my first published story, and it was published pretty much as I wrote it—I think I added a paragraph on the first reread. I did a bit more tinkering in conversation with my editor, but there’s probably about a page worth of total difference between the story as it appears in my book and that first sleepless version.

As a writer without a terrible amount of discipline, I tend to trust certain forms of the euphoric moment. A lot of stories I’ve written in a single sitting have needed years of work—I now have a file of what I refer to as “the outlet mall of short fiction,” which consists of things that are written, but that I know are a bit “off” somehow. But the stories that were most insistent, that came to me not because I went looking for them but because they wouldn’t shut up until I sat down and wrote them from start to finish, always seem to me have an energy and a form to them that I don’t have to do as much work to create, even if I end up having to spend a lot of time revising the story.


What's the longest narrative time period you've ever contained in a short story?
Sixteen years, in the story “Snakes.” It’s not a terribly long period of time for a short story, but it was somewhat unusual for me, as I tend to more often than not think of the short story as a vehicle for explaining how a single moment came to pass. It interested me to think about the pressure that the passage of time puts on the way we tell a story. I always knew, even before I knew how that story ended, that the retrospective voice mattered there, that part of the story, and part of the processing of the childhood trauma, was in how the narrator was or was not able to talk about it as an adult, in what she revealed and how long she took to reveal it. It’s one of the reasons the advice “show, don’t tell,” so often drives me crazy— it’s sometimes good advice, but misinterpreted, it can encourage some writers to remove all self-awareness on the part of a narrator, when part of a story, especially a first-person story, is who is telling you things, and what they are telling you and why.
Posted by The Story Prize at 5:31 AM