In the 24th in a series of posts on 2011 short story collections entered for The Story Prize, Miroslav Penkov, author of East of the West: A Country in Stories (Farrar, Straus and Giroux), talks about coming to America from Bulgaria, writing in English, and translating his own collection into Bulgarian. 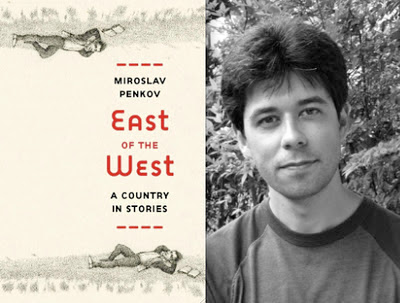 I usually tell my friends that I first arrived in the United States with a plan: I would listen to the English language, read it, speak it, befriend it, tame it and only then would I attempt to write it. I would need ten years before putting pen to paper, and even longer before considering the thought of publication. You are a reasonable man, my friends might say and then applaud my patience and commitment.

I am no reasonable man. I have no patience. The plan I speak of is a lie. Within the first month of my arrival, the week after the terrorist attack on the Twin Towers, I sent my first story to a science fiction contest. It was a story about an android who falls in love with a human girl, then dies of a broken heart. In the final scene, the girl begs him not to depart, not to shut his systems down. You don’t understand, she cries and gives him the big reveal: he’s not a cyborg, but has been raised as one. He’s human, just like her, the main subject in an experiment that has spanned all his life.

The story was returned to me within a week. I would need to print it on one side of the page only, and then resubmit. I did, and waited, and a few months later received my first rejection slip.

While living in Bulgaria I wrote stories set on the moon, in space, in imaginary towns with names like Mountain Springs and Ocean View. My characters were Jessicas and Johns and Jacks. I didn’t do this because I was unhappy with where I lived and wanted out. I did it because, like all young kids who mess around with writing, I imitated the books I read. But in Arkansas, surrounded by Jessicas and Johns and Jacks, unable to afford a car and so locked in a space that might as well have been some futuristic lunar base, it was Bulgaria I thought of, Bulgaria I dreamed of late at night. And for the first time in my life, I saw very clearly what I should write about.

There are eight stories in East of the West. Stories about the fight for Macedonia’s freedom, the Balkan Wars, the two big communist uprisings, the ugly Process of Rebirth during which the Communist Party forced all Bulgarian Muslims to change their names to what were deemed proper Bulgarian ones. There are stories about the fall of Communism in ’89, about the life after this fall, home and abroad. I tried to contain in this book voices that were strong enough to cross the Atlantic and speak of Bulgaria in a moving way, not just to the American readers, but also to me and to other Bulgarians who might be reading.

It took me almost three years of massive revisions before my editor accepted the final manuscript. And then within a couple of months, to everyone’s great surprise, FSG sold foreign rights in ten countries. Please, I was thinking, no Bulgaria. I’d worked on the stories for so long, struggled with them so much, I could not, would not go back and translate them into my mother’s tongue. But when the Bulgarian offer arrived it was my mother I thought of, and the rest of my family who didn’t understand English and so could never read my work.

It was agreed that someone else would translate the book and that in the end I would smooth out the translation. For months I felt guilty, very anxious. What was I doing, allowing someone else to translate my stories into my dear Bulgarian? Out of laziness, I was betraying everything that could be betrayed. My ancestors were looking down on me and shaking their great heads in disgust.

When a few months later the translation arrived I was relieved. The stories sounded awful in Bulgarian. And how could they not? Had I really expected that someone else could do my work for me? I emailed the publisher, apologized profusely. Then sat down and started work myself. I spent this summer working, moving slowly – for some stories a page per hour, sometimes a page per two. At first, the voices that spoke to me so clearly in English sounded so rusty, fell so flat. I had to reimagine them from scratch. I hated every minute of translation. Sometimes I couldn’t sleep. My mood was always down. But now, when everything is over, I love the way the stories sound, so close to my heart, so dear.

Will the Bulgarian readers like the book? I hope they do. Although, when it comes to success, especially in Bulgaria, my hopes are always low. But at least now I feel no shame, no sense of great betrayal. Besides, my grandmas like the stories very much. And at the present moment, this seems enough.
Posted by The Story Prize at 2:30 PM