In the 59th in a series of posts on 2011 short story collections entered for The Story Prize, Emma Straub, author of Other People We Married (Five Chapters/Riverhead Books), expresses her enthusiasm for big stories. 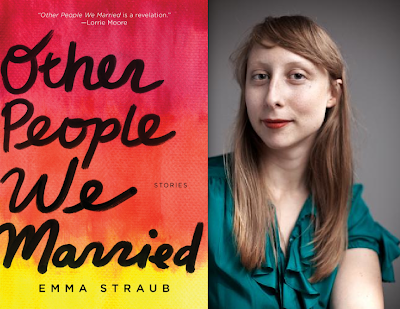 2011 was the year I fell in love with the epic short story. You know the type—a story that spans years on a single page, a story that somehow does the work that an entire novel might. No kitchen table love affairs here! These are stories that require time and elbow room. We’re not talking flashbacks here, two storylines that dovetail together at the end for a double-barreled epiphany. We’re talking a single-pronged story that starts in one moment in time and finishes at a distant point in the future. I want to spend the cold winter months holed up in my office, reading stories that could easily be three hundred pages long, and yet—miraculously!—are under thirty. Maybe my New Year’s Resolution will be to actually write one.

Here is a brief list of short stories that fit this gigantic bill:

Mavis Gallant’s "The Remission": Mavis is not afraid to subvert the reader’s expectation, and does so here, over and over again. The story lingers like an illness (I mean that as a compliment), where death is looming but still mysterious, its timetable unable to put on a schedule. Can stories about a death in a family be funny, and sexy, and strange, and unusual? Yes. Yes, they can.

Lauren Groff’s "L.DeBard and Aliette": Days pass, weeks, seasons, years, lifetimes. This more than any other feels like a novel to me, a whole truth split open. It is ambitious and ballsy and beautiful. I think that this was one of the first—if not the first—of Groff’s stories to be published, which is a little bit like a newborn child singing Tosca. It doesn’t seem possible, and yet, here it is.

Annie Proulx’s "Brokeback Mountain": Another love story, made famous by the film adaptation. It’s just as moving on the page, the language as rough-shod as the characters, their sweetness only truly visible over the course of their doomed and impossible love affair. The accumulation of time matters here, as it does in life, and the best memories are made even more poignant by our distance from them.
Posted by The Story Prize at 11:59 PM