In the fifth in a series of posts on 2012 short story collections entered for The Story Prize, Natalie Serber, author of Shout Her Lovely Name (Houghton Mifflin Harcourt) talks about where her stories come from. 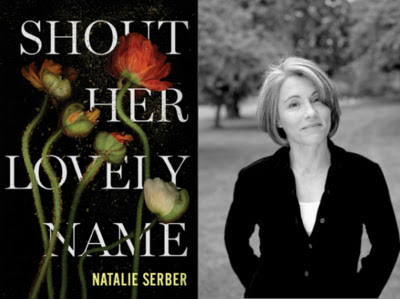 What made you want to become a writer?
I can’t remember a specific moment of wanting to become a writer. It seemed that writing was something I always did. As the only child of a single mother I spent great stretches of time by myself. I read to escape loneliness and when I wasn’t reading, I was pretending to be the characters in the books I loved, continuing their stories in my bedroom. I carried an onion as a pretend doll, just like Laura Ingalls Wilder. I eavesdropped on neighbors and took notes like Harriet the Spy. Sometimes I wrote my stories down. I guess it was my own version of fan fiction.

My mother had two jobs when I was a girl. She was a schoolteacher and a cocktail waitress. Both jobs required that she wear nylons and I remember being delighted when she opened a new package because the hose came wrapped around a thin piece of cardboard. She would give the blank cardboard to me and I wrote out the stories I’d been making up. Of course we had plenty of paper in the house, but I felt the cardboard elevated my stories to something very special.

What's the shortest time it has taken you to write a story?
The second story I ever had published I wrote in one sitting.  It is only about 1000 words and it’s called “The Day You Stop Being A Cat.” It’s told in second person, but really it is the point of view of a girl who is pretending to be a kitten, meowing and rubbing up against her mother’s bare legs. The mother tells the girl to stop. She tells her girl that she’s been up all night, contemplating suicide. The only thing that prevented her from taking her own life was holding on to the girl’s first grade school picture, as a tether. On hearing this, the girl stops pretending, stands up and goes into the kitchen to make them both toast. It came out of me in rush and I think I only revised once or twice.

If you've ever written a story based on something another person told you would make a good story, what were the circumstances?
My best friend is a wonderful storyteller. Right after her first child was born, when she was in that state of afterglow, wanting to be a mother to the world, she found herself on a long flight with a caterwauling baby (that was her word choice). It drove her to tears, both because she worried about the baby’s discomfort and because her milk let down and wouldn’t stop, long after her own child was sated and sleeping in her arms. Finally she handed her infant over to her husband and went marching up the aisle to see what was going on. She came upon two nuns who were beside themselves—unable to comfort a baby they were bringing to his adoptive parents. My friend offered to nurse the boy and they agreed (this was long before HIV was a worry). I remember thinking, oh yeah, that story is now mine.  It became “This Is So Not Me.” It was the first story I ever published.

What writer or writers have you learned the most from?
In my early twenties I was somewhat lost. I really wasn’t present or thoughtful in my decisions or choices; I just jumped into the fray. The stories of Lorrie Moore, Ellen Gilchrist, J.D. Salinger, Deborah Eisenberg revealed to me, without a shred of judgment, characters making the same sorts of mistakes. I felt understood in a way that I was incapable of understanding myself. What I learned was to maybe go easy on beating myself up, and I learned to strive to write without moralizing. I learned that writing is an act of empathy.
Posted by The Story Prize at 10:53 AM