In the fourth in a series of posts on 2012 short story collections entered for The Story Prize, Rob Davidson, author of The Farther Shore (Bear Star Press), discusses obstacles he's encountered, writing quickly, writing slowly, and what triggers his ideas. 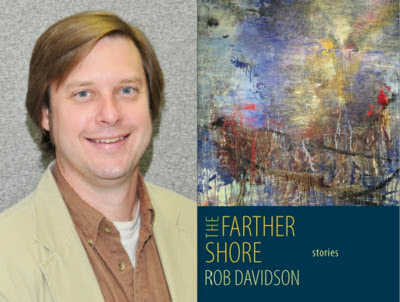 What obstacles have you encountered in your work, and what have you done to overcome them?
Frequent obstacles include fatigue, anxiety, self-doubt, pride verging on hubris, teaching, debt, exhaustion, my ongoing attempt to be a good husband and father, my 1939 Gibson L-00, ambition, lust, anger, occasional insobriety, a great new book by someone else, my obsession with rock music, and a general sense that life is filled with many wonderful things that don’t involve me isolating myself in my studio with the door shut. What have I done to overcome them? I’ll paraphrase Isak Dineson: A writer should work a little bit every day, without hope or despair.

What's the shortest time it has taken you to write a story?
I wrote “The Student,” which is in my new book, The Farther Shore, very rapidly. The germ of it was told to me by a good friend, to whom something very similar happened (as a graduate student, he slept with an undergraduate who feared she’d become pregnant). Immediately after my friend told me his tale, I knew it would work as a short story. It seemed like a gift dropped in my lap. I asked him if I could use it, and he wished me the best. I wrote the core of the story very quickly, in just a week or so—light speed, for me. I tinkered with it for a while after that, but the final version stayed pretty true to that initial draft.

What's the longest time it has taken you to write a story?
I wrote several failed versions of “Criminals,” the long story that concludes The Farther Shore, before writing the version that is in the book. I began drafting the story in 2004 and worked fairly steadily on it for the next two years. Howard Junker accepted it at ZYZZYVA, then proceeded to give it a good, old-fashioned hard edit, cutting it by almost a third. After that first publication, I revised it, restoring much that Junker had cut, and sent it out to the Camber Press fiction award. To my delight, Ron Carlson selected it for the prize. I revised it a third (and final!) time for The Farther Shore—so there are essentially three different “finished” versions of this long story. Faulkner had something like four published versions of “Barn Burning,” and of course Raymond Carver was known to fiddle with his work after it had seen print, so I guess I’m not alone.

How often does an idea for a story occur to you, and what triggers those ideas?
A story can be triggered by almost anything: an overheard bit of conversation, an image or detail from life around me, a line in a book I’m reading. Once, I was distracted from reading a book in my back yard by the low, steady drone of a single-engine airplane moving slowly across a brilliant, blue sky. I wondered, Who is on that airplane? Where are they coming from? Before I knew it I was at my desk, writing the first draft of “Barnstorming,” a story in my first collection, Field Observations. Years later, I was reading The Routes of Man, by Ted Conover, and a line leapt up off the page: “It’s much easier to make a roadway dangerous than to make it safe.” I copied it into my notebook, carried it around in my head for a little while, found I couldn’t stop thinking about all the things that single sentence might mean or suggest, and now I’m hip-deep in drafting a novel, The Road Builder. Triggers for stories are everywhere; it’s just a question of paying attention. Henry James said it best: “Try to be one of the people on whom nothing is lost.”