In the sixth in a series of posts on 2013 short story collections entered for The Story Prize, Candace Leigh Coulombe, author of Secret Breakfast (Egg & Ink), discusses why she likes to think of her stories as fables. 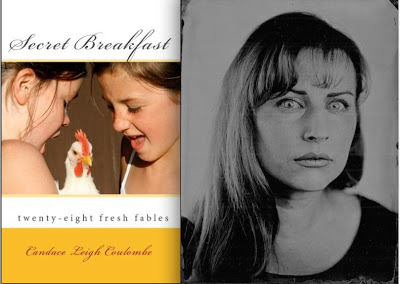 You call your stories fables. What distinguishes a fable from a short story?
A fable is generally defined as a short story that illustrates a moral lesson, usually populated with woodland animals, mythical creatures, or anthropomorphized inanimate objects. While I don’t aim to have a pithy maxim or tidy bow at the end of each of my tales, I do prefer stories in which something actually has to happen; that is, some transformation must occur. And, in which the reader along with the characters is propelled to an unexpected yet inevitable conclusion.

Traditionally, whether as poetry or prose, there is a cadence to fables. I appreciate lyrical language and, to me, the assonance and sibilance are as important as the lesson. The fable also has a rich oral tradition. It’s a delicate balance between writing very short fiction in which every word is purposeful and writing the kind of story you can tell. There’s something enduring about a fable that’s romantic, though not sentimental.

What made you want to become a writer?
I’ve always been a voracious reader. I’m particularly drawn to the short form: O. Henry, Dorothy Parker, Saki, Flannery O’Connor, and F. Scott Fitzgerald’s short stories. These tales are so set in the manners and morals of their times, and yet universal in matters of the heart.

While I might enjoy reading an existentialist like Camus or Kerouac, or a hard crime writer like Cain or Hammett, their tales show the universe disordered, mercy spare, and violence random. As a writer, I feel more kinship with Flannery O’Connor and Alfred Hitchcock – both Catholics. Her stories and his television program – while dark – are guided by grace. As O’Connor said, “I write the way I do because (not though) I am a Catholic.”

Though I do write a few allegories, most stories don’t reflect religious themes. For me, though, Catholicism inevitably informs my worldview. Each story ends in the way only it can.

What stories inspire you?
There are a few I could read over and over again: “The Offshore Pirate” by F. Scott Fitzgerald, “Teddy” by J.D. Salinger, and “Big Blonde” by Dorothy Parker. I also am drawn to the obituaries in The New York Times. So many fascinating true stories which don’t come to light until years after! Writing engaging fiction requires a commitment to the truth. It’s the truth in the details which allows the writer to craft a compelling lie. So, whether I’m writing about the gold rush or espionage or automats or chicken farms, I’m inspired by historical articles, photographs, and art that reflect the language and tone of the time and place.

Do you find writing flash fiction and short-short forms challenging?
My stories are each 1,000 to 2,500 words, or sometimes even fewer. I believe in the fierce economy of words and I endeavor craft rich stories which deserve a second or third read. I believe a very short form is a very good match for my very capricious nature. The wonderful thing about writing many very short stories is the ability to live vicariously through different eras and locales – to live in them so completely while writing and then to, with great caprice, abandon them just as completely to discover another that’s new.

As our daily lives become busier and more complex, short stories become even more readable, relevant, and valuable. I appreciate the opportunity to provide a complete story experience in just a few short pages. There’s a great satisfaction in reading a story beginning to end in as little as a coffee break. It’s very different than picking a novel, even the best one, up and down and up again. So, whether it’s through a smartphone app, PC, or my preferred dog-eared paperback (swollen and ruffled from being dropped in the tub), there is no better time for the short story than right now.
Posted by The Story Prize at 11:37 AM