Where David S. Atkinson Gets His Ideas

In the third in a series of posts on 2013 short story collections entered for The Story Prize, David S. Atkinson, author of Bones Buried in the Dirt (River Otter Press), discusses the irregular flow of story ideas. 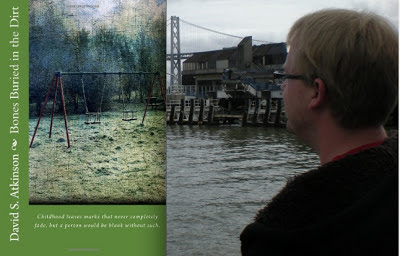 How often does an idea for a story occur to you, and what triggers those ideas?
This very question once itself triggered a story of mine called "Ideas: Where to Get Them and What to Do When They Won’t Leave." In that story, a personified (bad) idea follows the narrator home from a conference and only leaves when the narrator pretends to be getting to work on "[s]omething along the epic line. Maybe three thousand pages of consciousness stream unformed dream logic babble with a hint of poetic inversion." It is one of my more bizarre stories, which I feel is the most fitting answer to this particular question.

After all, there is no regularity to when ideas for stories occur to me, or anything specific that typically triggers them. The timing seems to be utterly random and the causes perhaps even more so. All of a sudden, one is there. Some are just ideas, and nothing more comes of them. However, sometimes they arrive with an overpowering voltage and an element of marvel. Those are the ones I know I have no choice but to carry through.

One story bubbled around in my head for over twenty years, brought on by a brochure for a tourist attraction I'd seen on a long road trip in the Southwest as a kid. The attraction was some kind of optical illusion house where objects appeared to roll uphill. The concept fascinated me, and simultaneously disappointed me because I knew it wasn't real. I always wondered what it would have been like if it wasn't illusion, something marvelous and at the same time completely pointless. Then a few years back, for reasons that I cannot explain, my obsession over that brochure suddenly sprouted into my story "Cents of Wonder Rhymes With Orange."

Another story of mine, "Counter Spring," which was inspired by a conversation about Sharia Law's treatment of rape, came quicker. I imagined a world where avarice was virtue and merchants could only be believed if seconded by a customer (because, after all, the customer is always right) even before the conversation was over. Though, truth be told, it took me two years to finally get the story exactly right despite the fact that the idea was born almost instantly.

Still another, "The Pipe," was something of a mix between a period of years and an instant. For years, I'd been fascinated by an exposed pipe that extended over a creek in my hometown. My parents drove by that creek once in a while, but I'd never actually walked anywhere nearby. At each end, the pipe had these fan-like half circles of steel mesh. I suppose they were to keep kids from messing around on top. Regardless, I saw that pipe over and over again for years, and kept thinking about sneaking around the fans and walking around just because I obviously wasn't supposed to. Then, when a friend read a particularly bad story of mine (one I delusionally thought was Lovecraftian) and told me in no uncertain terms how horrible it was, I insisted I'd show her what I could really do. Suddenly the pipe, as well as the story that involved it, popped into my head.

My ideas come when they come. They are triggered by whatever triggers them. I just sit down to write and hope for the best. That's all I can do.
Posted by The Story Prize at 11:55 AM