Tom Barbash Zeroes in on a Quandary

In the 14th in a series of posts on 2013 short story collections entered for The Story Prize, Tom Barbash, author of Stay up with Me (Ecco), answers questions about where his stories start, how he organized his collection, and where he finds inspiration. 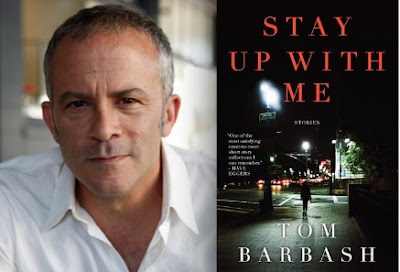 How often does an idea for a story occur to you, and what triggers those ideas?
Often I begin with a desire to write a story, and then I’ll zero in on some sort of quandary. A man tries to keep a secret from a room full of friends; a mother wrestles with her fears that her son has become his father. The world of the story is usually something I’ve lived within, or witnessed closely.

What's your approach to organizing a collection?
I tried to listen to the transitions so that one story might in some way lead into the next. I tried to put a slightly funnier story after a particularly sad one and vice versa. I separated the kid voice stories from the parentally told ones. I also put the most violent story in the penultimate spot, and ended with a story that pulled you out of the collection and back into the world.

What's the worst idea for a story you've every had?
A story that ended in a violent mosh pit at a college dorm party.

Where do you do most of your work?
In an office outside my house. It’s a little shed but it’s private and quiet and a good place to think.

In what other forms of artistic expression do you find inspiration?
Movies. Good TV shows like Mad Men or the Sopranos. Museums.

What's the best and worst writing advice you've ever gotten?
To write a story my characters would recognize as true. The worst? You can’t write a good short story about tennis.

What's the shortest time it has taken you to write a story?

What's the longest time it has take you to write a story?
Ten years. And then I finally nailed it, like I'd been stalking an elusive beast.
Posted by The Story Prize at 8:50 AM