Valerie Trueblood on the "When" of Stories

In the 17th in a series of posts on 2013 books entered for The Story Prize, Valerie Trueblood, author of Search Party (Counterpoint Press), lays out a notion central to short fiction. 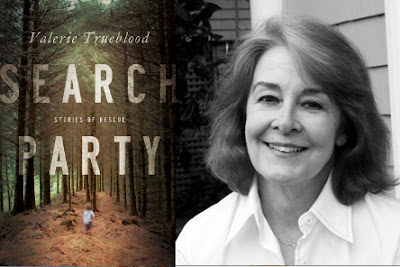 “Anything can happen,” we say. The short story accepts that claim, and the truth it is after doesn’t seem to reside in character or plot. It’s a truth about experience itself, particularly what is abrupt, haphazard, or ungovernable in human life. In most cases the truth can’t be put into words other than those of the story, which is freer than the novel to be simply anything, as one day in a life—no matter how ordinary the life—can be anything, with bombs in it or kisses. The luck of the short story is to be that one day, to have a day’s suddenness in it, even if it covers years. Its task is to be one thing—a temporary plight or state of being—and not many. Thus its nature seems to me to spring out of the notion of  “when”:

When...
... he accidentally shot his brother.
... the killer appeared on the road.
... he awoke to find he was an insect.
... she followed him to Australia.
... the horse threw her.
... his superior officer kicked him.
... he hugged the leper.
... the prostitute saved the travelers.
... the teacher stayed the night with her mad student.
... the soldiers on both sides opened fire on the messenger dog.


These moments are from stories of episode or event. We could name events from the incomparable stories of Chekhov, yet Frank O’Connor can say of him that he writes “stories with the very minimum of episodic interest.” And in truth they do take place for the most part in the alert senses and sore minds of their characters. But stories more openly located in states of mind also have this core of the “when” in them.

When...
... he heard the voices.
... the grandmother forgot the children she was minding.
... the parents tried to think of a present to take to their son in the institution.
... they walked in Kew Gardens.
... the old woman looked back on her ruined wedding day.
... he stayed at the side of his dying mother-in-law.
... she nursed the hurt jockey.


We live in a sea of information now, and the novel seems to thrive on it, but the short story, while scrupulous about detail, keeps much of the factual world out; it limits what flows into its set-apart time, its “when.” To Flannery O’Connor, the story, like the poem, was required “to do something with the least possible number of movements.” So the patience and generosity of the novel are denied it, while without hurrying, explaining, or asking for undue indulgence, it has to get somewhere quickly, often passing through an ordeal, and leave the reader in an awakened state.

We keep hearing that this oldest of forms is in the midst of a renaissance, at the same time that we hear that it is having a hard time finding its readers. But it seems to me the short story is always being reborn and will never lack for readers in love with its waywardness and its mystery.

When...
... they had hiked to the top of the cliff he asked her for a divorce, and
... he left the penitentiary no one met him, and
... it was time, the prisoners walked out to be shot.


Writers will go on writing of the moments when life is most saturated in meaning, no matter how often they’re asked if they’re ready yet to tackle a novel.
Posted by The Story Prize at 1:14 PM